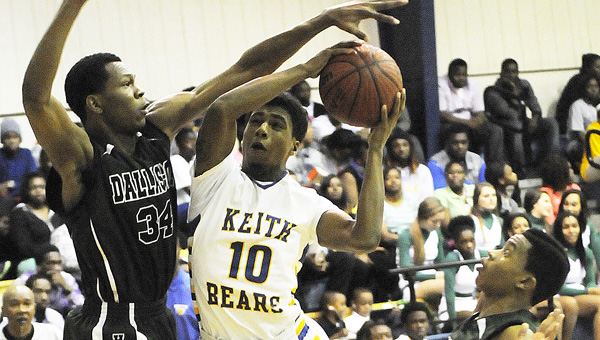 Dallas County’s William Lee did not start and was questioable to play in Tuesday night’s game against Keith, but entered the game late in the first quarter and provided a big spark for the Hornets. Lee scored eight points and had two blocks in the game.–Daniel Evans

The game was tied 36-36 with 4:01 remaining in the third quarter and from there the Hornets dominated, holding the Bears to only two points the remaining 12:01 of the game. Keith’s lone score in that span came on a John Pettway layup with six seconds left to play.

“Later on toward the end of the third quarter and in the fourth we sort of controlled the tempo, and they were one and done,” Dallas County head coach Willie Moore said. “We played a really good defensive game tonight.”

Keith head coach Tommy Tisdale said he simply didn’t coach well enough to give his team a chance to win.

The Hornets also got a little unexpected help from power forward William Lee, who was questionable for the game with a toe injury that has been nagging him a lot of the season.

After not starting, Lee entered the game with two minutes remaining in the first quarter to applauding from the Dallas County cheering section.

“When he came in the game it changed the complexion of the game,” Moore said. “It swung it over in our favor.”

He made his presence felt right away, dunking on his first possession and extending an early Dallas County lead to 11-8.

Lee clearly wasn’t 100 percent most of the game and could be seen limping at times.

He scored only eight points, but Moore said he gave the rest of the team a big lift when he entered the game.

“I don’t think he scored a lot tonight but he’s about 70 or 75 percent but 75 percent of him is better than 100 percent of most players,” Moore said. “We gained controlled of the paint when he was in the game.”

Keith head coach Tommy Tisdale agreed that Lee, despite being not being completely healthy, was the difference maker in the game.

When Pettway for Keith scored on a layup to tie the game 36-36, the Bears appeared to have all of the momentum. Up until that point, Dallas County had led most of the way.

The Hornets took control of the game back almost immediately as Kendell Motley hit two free throws and then Lee — who entered the game for the first time in the second half — dunked to give Dallas County a 40-36 lead.

After another score by Motley and Lee’s final basket of the game, Raheem Phillips knocked down a three with just seconds remaining in the third quarter to give the Hornets a 47-36 lead.

The Hornets slowed the pace down in the fourth quarter, eating clock and making each possession more valuable, but even when Keith had the ball the Bears kept missing shots.

Dallas County only scored seven points in the final quarter, but it was enough due to their defensive pressure that nearly blanked the Bears.

Pettway scored 15 points in the game for the Bears.

Anfernee Simmons, usually the spark plug to the Bears ‘offense, was held to only five points and one made field goal.

Dallas County does not play a road game the rest of the regular season and hosts Childersburg Thursday night.

Keith’s Lady Bears started hot Tuesday night against Dallas County and continued to seemingly score at will on their way to a 42-9 halftime lead.

The Bears slowed down a little bit in the second half of their 55-20 win, as the entire bench had a chance to play. Keith head coach Cecil Williams said it is very important that his team is starting to play its best basketball of the season now.

“[It is] very important because we need to know what we are capable of and what we are working towards the whole year,” Williams said.

“If we are playing our best ball now, the good thing is hopefully we got all the bad luck out of the way in the beginning of the season.”

Keith’s other players stepped up, including Zykia Pettway who scored 21 points.