Keith pulls away from Ellwood in key area contest 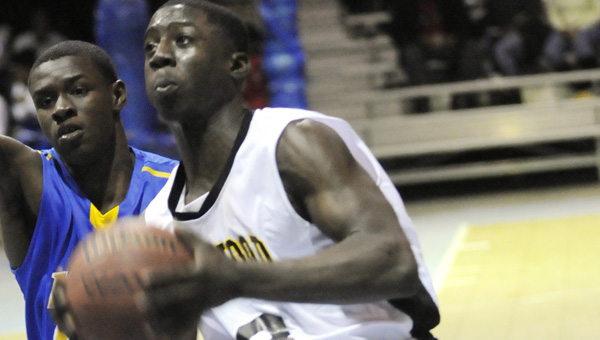 Ellwood Christian’s Jalen Furlow looks to score in Wednesday night’s game against Keith. The Eagles only trailed by eight at halftime, but the Bears pulled away in the third quarter and held on for a 3-0 start in area play. The Eagles are now 1-2 in area play.–Daniel Evans

Keith (12-5) used pressure defense and timely baskets to pull away from Ellwood Christian (2-14) for a key area win.

In the 75-61 victory, the Bears were able to consistently get to the basket, despite the Eagles length in the paint that makes it hard to score inside.

“Area wins are extremely huge,” Keith head coach Tommy Tisdale said. “They get bigger when you go on the road and get one. This is the type of environment you have to play in.”

Although the Bears led 38-30 at the half, Tisdale felt his team was outplayed in the first half. With Keith among the favorites to win the Class 1A state championship and ranked No. 3 in the latest ASWA poll, Tisdale said his team needs to get used to taking everybody’s best shot.

“I don’t want to say we are the best thing out there but when you have success you are now everyone’s target,” Tisdale said. “I don’t think my guys have comprehended that because for the longest we have been the underdog and now currently the roles tend to be reversed, so now everyone else is giving us the shot we have been giving everybody in the past.”

Ellwood led 18-16 after the first quarter, aided by a hot start from power forward Ladarrius Parker. But the Bears pressure started to take its toll in the second period, resulting in easy baskets that gave Keith a 28-21 lead. The Bears took a 38-30 lead into the half and then controlled the second half after a quick start to the third quarter.

By the time the game entered its stretch run, the outcome was already in hand. Keith led 69-51 with 4:17 left to play. The Bears held off one final Ellwood run that threatened to get the deficit to within single digits in the final minute.

The Eagles have had a lot of close losses this season and Wednesday night’s game was no different. Ellwood head coach Stephen Hendrieth felt his team lost focus in the second half.

John Pettway led the way for the Bears with 24 points, with many of his points coming on drives to the basket. Demond Holmes scored 18 points for Keith and Anfernee Simmons added 11 points.

Parker led the way for the Eagles with 17 points, with eight of those coming during a first quarter that saw him attempt seven free throws.

In its next game, Keith will host Southside Friday night.