Movies come to a close at Selma’s Walton Theater 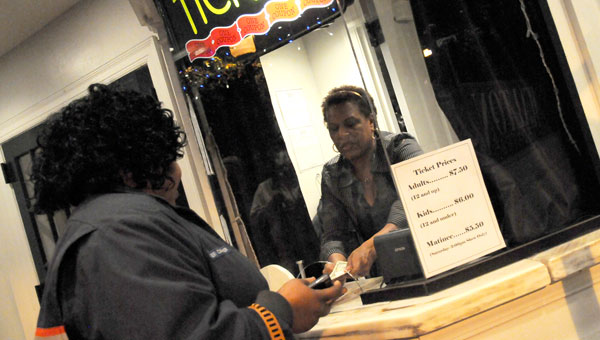 Theater operator Sharon Jackson sells a tick to Regina Drane to see “A Medea Christmas” on Friday. David and Sharon Jackson decided to end management after the city failed to approve a transition plan or present a counter offer. (Josh Bergeron | Times-Journal)

Saturday marked the end of an era at the Walton Theater.

After two years of operation, the Jackson family showed its last movie Saturday — “A Madea Christmas.”

Sharon and David Jackson decided to end management of the city-owned facility after the Selma City Council’s Public Building’s Committee decided not to approve a transition proposal or present a counter offer.

A crowd of 78 moviegoers filed into the theater Friday — the penultimate day of operation under the Jackson family — some for the first and potentially last time.

Regina Drane came with a group of friends, for the first time, after she heard the theater was closing.

“We don’t have a whole lot to do in Selma,” Drane said. “I really hope it stays open for the people. I would like to see someone else come in and open it, to give the kids something to do.”

But for others, it was the latest in a long string of nights at the Walton Theater.

Dallas County resident Martie Tolbert first came to the movies as a child, but the theater was much different in the 1960s.

“Whites sat down and blacks sat up top,” Tolbert said. “Back then we used to come in through the side door and they would take us straight up top, to the balcony.”

He continued coming to the theater periodically into adult life. Though, Tolbert says he occasionally travels to Montgomery to see movies.

“It’s a shame the city couldn’t work something out,” he said. “For people my age, it would give us something to do. Sitting at home and watching the same movies over and over gets old.”

On the final weekend of operation, Sharon Jackson spoke candidly about her time as a theater operator, calling it sad, but also a relief.

“It’s definitely bittersweet,” she said. “We’ve had customers that have come to almost every movie. We’ve built like friendships almost.”

Though the Jacksons will no longer operate the Walton Theater, they aren’t leaving Selma.

“We came here as retirees and after we leave the theater we will go back to being retirees,” Sharon Jackson said.

The Walton Theater originally opened in 1914. In 1932, it converted to an “all-talking” picture show, which garnered national attention.

During the 1940s the theater began staging “Amateur Nights,” in addition to feature films. A typical weekend night at the Walton might include a movie, local talent acts, newsreels and a comedy show.

In the 1970s, the theater fell into a state of disrepair and was closed. Selmians helped to raise more than $1 million to reopen the theater. It reopened in May 1985 after five years of planning and construction, spearheaded by local residents Larry Striplin and Anita Bryant.

The theater stopped showing feature films in the 1990s.

In October 2011 David and Sharon Jackson partnered with the City of Selma to reopen the Walton as a first-run movie theater. The city helped by purchasing new state-of-the-art digital and sound systems. The first film shown in the Jackson’s Walton Theater was “Mission Impossible IV,” according to the theater’s website.

The theater isn’t closed quite yet. Jason Isbell, a musician from North Alabama, will perform at the theater on Dec. 27.

The city is also in talks with a new lessee to run the theater.