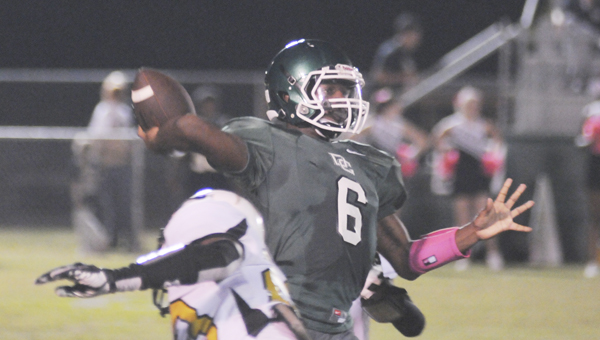 Dallas County quarterback Prince Tolbert throws a pass against the Dadeville rush in the Hornets 36-0 loss Friday night. The Hornets accounted for 92 total yards in the game, while the Tigers piled up 341 yards offensively. Dadeville is ranked as the No. 7 team in the state by the Alabama Sports Writers Association poll.–Daniel Evans

PLANTERSVILLE — Dallas County has shown a lot of progress this season by matching last season’s win total and being competitive against nearly every opponent it has played, but Dadeville showed the Hornets on Friday night that they have a long way to go.

Dadeville, ranked No. 7 in the state in the Alabama Sports Writers Association poll, dominated the Hornets in a 36-0 romp that was over by halftime.

“They are exactly where we want to be,” Dallas County head coach Barry Colburn said about the Tigers. “We want to be a contender. We want to be in the playoffs and we want to try to gain some respect around the state. We are taking baby steps but I think we are getting there because of the effort our kids make.”

Almost nothing went right for the Hornets in the loss. Dallas County was held to 92 yards of total offense in the game, while Dadeville racked up 341 offensive yards, including 149 yards and three touchdowns through the air.

“We executed offensively,” Dadeville head coach Richard White said. “We know we can run the football if we need to. We were trying to see if we could get our passing game going because somewhere down the road we are going to be able to throw the ball more than we run it.”

On the opening drive of the game, Dallas County managed to hold the Tigers to a three-and-out, but the Hornets fumbled a punt return. The game was downhill from there.

“It was stuff like that all night,” Colburn said referring to the fumble on the punt return. “We were a little bit in the wrong place. Angles were a bit wrong. I don’t know if it was focus or we had to learn too much for this team. They are very polished.”

Following the fumble, the route was on.

Tigers Quarterback Chris Tolbert threw a shovel pass to Michael Miller for a 5-yard touchdown with 7:34 left in the first quarter.

The Hornets would see the shovel pass again when Tolbert hit Zachary Johnson for a 6-yard score with 11:23 remaining in the second quarter to make the score 12-0 Dadeville.

Another special teams miscue set Dadeville up with a chance to add more points in the second quarter.

A high snap forced Hornets punter Prince Tolbert to tuck the ball and try to run, but he was tackled in the backfield to give the ball back to Dadeville.

On the next play, the Tigers’ Tolbert hit Tyreke Stone for a 25-yard touchdown pass to make the score 19-0 Dadeville, following a successful extra point by Zachary Sims.

Dadeville continued to move the ball with ease, as Tolbert hit Miller on another shovel pass to give the Tigers a 26-0 lead going into halftime.

The second half wouldn’t look a lot different, other than the Tigers shuffling in some of their reserves.

Dartavious Parson scored a 4-yard rushing touchdown to extend Dadeville’s lead to 33-0 with 5:19 remaining in the third quarter. Sims would finish the scoring with a 35-yard field goal with 2:59 left to give Dadeville a 36-0 lead.