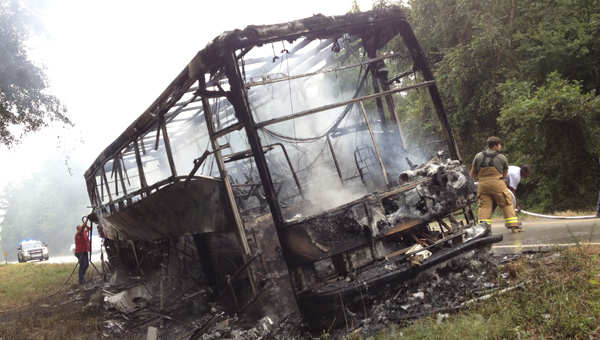 By Daniel Evans and Josh Bergeron
The Selma Times-Journal

A charter bus carrying Concordia College Alabama football players caught fire Saturday afternoon after a tire blew out on Alabama Highway 219, less than a mile before the intersection for Perry County Road 64.

No football players were injured, but the team did lose equipment in the blaze.

“The players are okay and everything is okay,” said Concordia assistant football coach Reginald Lumpkin. “We just made it back to the school.”

The team was headed to Miles College in Fairfield for a football game.

“It was still flamed up when we got there, but they got the kids out and across the road,” Essex said. “[The bus] is completely destroyed.”

Since the school lost most of its equipment in the fire, its game with Miles College was canceled. The game will not be rescheduled, according to the Miles College athletics page.

Keith dominates Holy Spirit 50-0 to get back on…