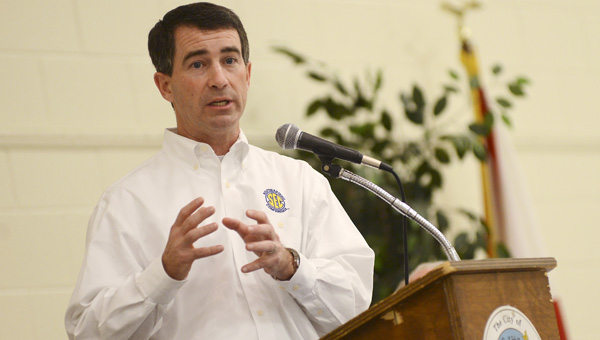 The Selma Quarterback Club held its second meeting of the year Monday, with Southeastern Conference referee Marc Curles sharing insight on the everyday life of a SEC official.

Curles, who has been refereeing for 25 years, has been working as a SEC referee since 2006.

Although he said getting the calls right — like a controversial roughing the passer call or a pass interference — is tough, the hardest part about his job is overseeing his entire crew.

“The toughest part about being a referee, because the referee is a crew chief, is managing the other six personalities on the crew and having them pull together and work together as a unit,” Curles said. “We say we are the third team on the field and we really are.”

He said he found out very quickly, in his first assigned SEC game, how much attention is paid to referees. With the sun bearing down on Neyland Stadium, he missed catching the coin toss three times at the 2005 UAB-Tennessee game. The next morning, the blooper was reported in the local newspaper.

Curles said fans and announcers often misinterpret rules changes and that in today’s world, where every call is scrutinized expectations are very high for referees to get calls correct 100 percent of the time.

“People’s expectations of us are that we start the game perfect and get better every play,” Curles said. “That’s actually the expectation we place on ourselves too, knowing full well that we aren’t going to be perfect.”

Every week, Curles and his crew meet Friday to review the previous week’s game film and go over controversial calls.