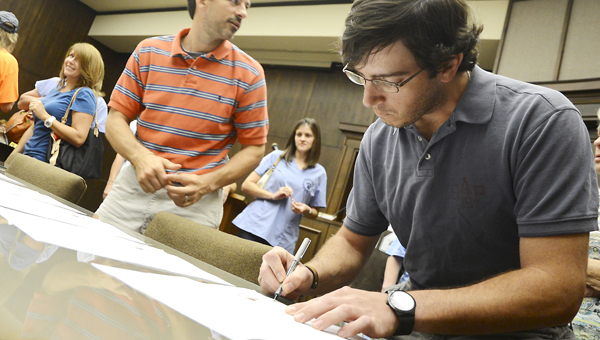 The Central Alabama Animal Shelter may be empty soon.

Selma Mayor George Evans signed a pardon Tuesday, preventing the Central Alabama Animal Shelter from killing any animals until Aug. 27. The pardon also promises to find homes for animals in the shelter.

“Our goal is to get a clean slate for the shelter,” Central Alabama Animal Shelter Board president Sarah Youngblood said. “The more animals we can find homes for, the better.”

The agreement, drafted by Macon, Ga. resident Shane Smith, is part of an effort to reduce the number of animals killed at shelters around the United States. Selma is the latest stop on Smith’s journey.

Six of the shelters that agreed to the pardon have found homes for their entire animal population, Smith said.

The pardon doesn’t provide any monetary support to the shelters. Instead, Smith said he builds a network of animal shelters around the country willing to exchange animals.

Youngblood said animal shelters in the South, including Selma’s animal shelter, often suffer from overcrowding and high kill rates, but northern shelters have the opposite problem.

Rebecca Harshman owns an animal transport company called Relay Rescue and explained how animals are rescued from high-kill shelters, such as the Central Alabama Animal Shelter.

“It’s a big circle of rescue,” Harshman said. “If an animal is being rescued and sent somewhere up north, I may only drive one leg of the trip. Things like (the pardon) are important because it allows an area that has an overcrowding of animals, such as the South, to ship animals to places where it’s difficult to get a puppy.”

The pardoning effort began shortly after Smith and his wife, Janet, rescued a dog in July that had been the victim of abuse.

“We went up to the kennels and I saw a dog in the back with a wire around her neck,” Smith said. “She walked up to Janet and I and then sat back down because she was so weak. On the way back, my wife suggested naming it Hope or Faith, but we settled on Hope.”

Smith took his newly adopted dog to a veterinarian, hoping to repair damage to the dog’s neck. It died July 26 from injuries suffered during abuse. Shortly after, he began his campaign against animal euthanasia.

“I don’t know when I am going to stop trying to get these agreements signed, but I don’t plan on stopping soon,” Smith said.