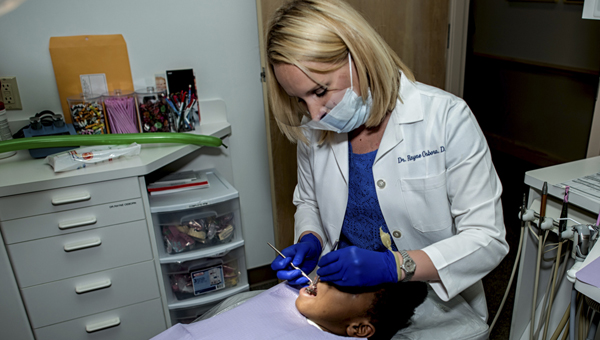 Growing up in Selma, Dr. Rayne Russell Osborn spent a lot of time playing at her father’s office — the office where she and her husband, James, now practice dentistry and co-own. Osborn said even from a young age she knew she belonged in the field of dentistry, she just didn’t know she’d be working in her hometown — alongside both her husband and father at Children’s Dentistry of Central Alabama.

“It’s a neat situation, and I feel very blessed I get to practice dentistry with my dad and husband,” Osborn said, noting she’s actually a third generation family dentist in Selma.

With a history of family dentists, Osborn received her undergraduate degree from Auburn University and graduated from dental school at the University of Alabama school of dentistry. She said deciding to practice in Selma was something she and her husband prayed about extensively.

“That was something my husband and I prayed about. And with him being a pediatric dentist, like my father, it made for a great opportunity to buy [my father’s] practice and come back and work here,” Osborn said. “And I have seen, just by coming back to Selma, just how much the Lord is moving in Selma. And that’s one of the reasons we’re here. We feel like we were called back to Selma to do this and to serve in the community, and we love what we do.”

Osborn said she has been practicing in Selma almost two years now, and said that her two children, Lane and Holden, are already being exposed to the some of the same things that she was exposed to growing up in the dental office.

“That’s just another great thing about living here,” she said, noting she sees her role in the community as a promoter of oral health.

“My husband and I, we both really want to help educate parents and kids about the value of oral health and how that can really help in their overall health for a long time,” she said. “It’s kind of fun being a small town dentist, and just kind of being here to serve and support in any ways that we can.”

Looking to the future, Osborn said she along with others in her generation are already stepping into leadership roles to help lead Selma’s future.

“First of all, we’re here in Selma, and we’re practicing. I really feel like our generation is (stepping up). I feel like there are a lot of young people that are taking over those roles, but I do think a high bar has been set, because I think there have been some great people that have come before us,” Osborn said, noting she now sees several mentors she had growing up, who are still actively mentoring young people. “One of the most important things to me about Selma right now, is that I really feel like the Lord is moving in Selma. I think that’s one reason why so many young people are moving to Selma, and I think it’s only getting better. I’m just glad I get to be a part of it.”