Rivers named Boy of the Year 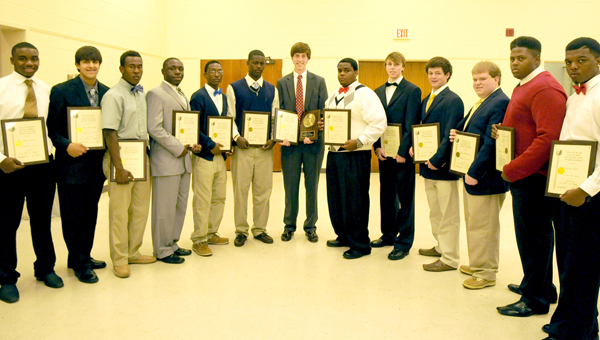 When Morgan Academy senior, Porter Rivers, accepted the 2013 Paul M. Grist Boy of the Year award, he told all 12 other nominees they were truly winners too. Rivers, center, is pictured with the nominees who represent all of the area high schools. — Ashley Johnson

Morgan Academy senior Porter Rivers was selected Thursday as the 64th Paul M. Grist Boy of the Year and recipient of the Bill Ellzey Scholarship at the annual Boy of the Year Banquet, held in the Carl C. Morgan Convention Center.

Porter, who is set to graduate on Friday, May 24 and he is the son of Betty and Scoop Rivers.

Rivers was involved in multiple campus organizations like Beta Club, National Honors Society and served as the student government president, all while competing in track and basketball. He is an Eagle Scout and participated in the Selma and Dallas County Youth Leadership Program.

He plans to attend Samford University in the fall and pursue a degree in engineering.

Thursday, there was a lot of talk at the banquet about Paul Grist — the namesake behind Boy of the Year award and several local YMCA institutions. Rivers said upon accepting the award, that he wished he had the opportunity to meet Paul Grist, but still hopes to follow in his legacy.

“To win this award is a huge honor and I hope to be able to make as big of an impact on Selma and this community as Mr. Grist,” Rivers said. “Just because there is just one physical award doesn’t mean that all of us here tonight aren’t winners and no one can say anything different about any of us.”

All who spoke at the event spoke about the legacy of Grist’s life and how he molded and shaped the community.

Bill Porter, CEO of the YMCA said he remembers Grist in the glow of the campfire calling on the Indian fire gods and telling scary legends of werewolves in the forest.

Porter said he often asks himself in the tough parts of life what Paul Grist would do, because “he was just that sort of guy.” Porter said he wants to encourage all of the nominees of the award to remember that legacy.

“What [Grist] stood for is you always need to put god first in everything. Everything in your life you need to put god first, think of others and put yourself last,” Porter said. “I heard him say it over the years as a boy growing up in Selma and it just stuck with me through the years. He would get us all in a huddle when we were playing sports at the YMCA and say, ‘Don’t wait to be a great man, you can be a great boy today.’”

There were 13 nominees this year for the award in total and each represented schools from across the area.