Young officer ‘adds some pizzazz’ to the SPD 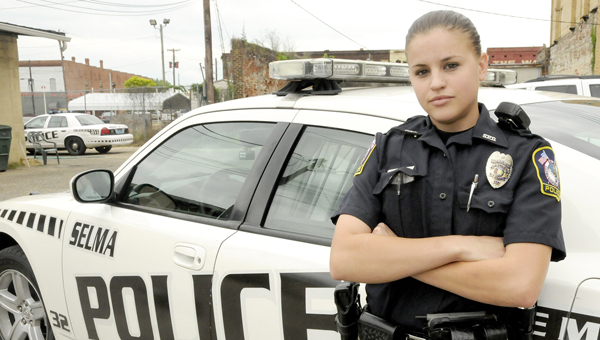 Alexandria Rangel, officer for the Selma Police Department, has been a member of the SPD since December. Although she is one of the department’s youngest members, her determination shines through her actions. –Sarah Cook

Editor’s note: Sunday marks the end of National Police Week. To commemorate the week, the Times-Journal is featuring one of the youngest officers on the Selma Police Department. We thank all of our officers, deputies, Troopers and other law enforcement officials for their dedication and their sacrifice.

Although she may not be the tallest police officer at the Selma Police Department or the oldest, Alexandria Rangel exhibits her drive and determination through her actions.

At age 21, Rangel has proven herself to be a strong asset to the SPD, said Nathan Gibson, field training officer for the department.

“She definitely adds some pizzazz,” Gibson said. “She’s ready for anything.”

Originally from Colorado, Rangel moved to Selma to be closer to her family. However, she knew she always wanted to be a police officer and said she wouldn’t let her big move put an end to her dreams.

“When I moved here I started taking classes at Wallace Community College to become a police officer,” she said. “It’s just something I knew I always wanted to do.”

A normal day for Rangel includes driving through Selma, making sure the community is safe. Her favorite part of the job, she said, is simply “being able to help all the residents and let them know that I’m there for them.

“It’s exciting, being so young and being a police officer,” she said. “I just started in December, so I’m still learning the ropes.”

Gibson said although Rangel is still “learning the ropes” of being a police officer in Selma, she has caught on quickly and brings high spirits to the department. Her positive attitude, he said, is what sets her apart.

“Every morning when we come in for briefing she’s definitely in high spirits,” Gibson said. “She’s doing really well with the training too. She’s still learning the city but we’re confident that she will do a really, really great job.”

Aside from working in Selma, Rangel said she has big dreams for herself. After learning the ins and outs of being a police officer, she said she would like to move up into higher positions.

“I plan to stay in Selma for some time, but I’d like to expand my horizons eventually,” she said. “It means a lot to be a police officer. My main goal is to set the best example for my son and everyone I’m around.”

Nathan Gibson of the Selma Police Department is awarded the title of Police Officer of the Year by the Selma... read more