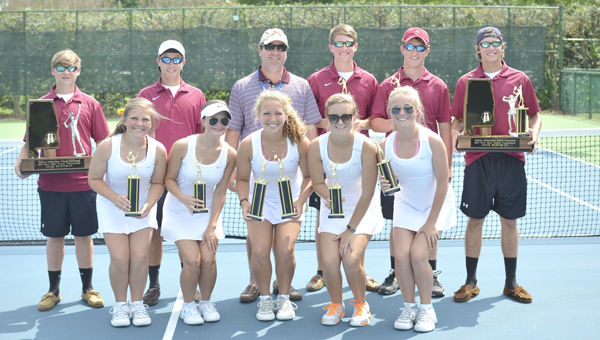 The Morgan Academy boys and girls tennis teams pose with the trophies they won at the AISA state tennis tournament in Montgomery this past week. Both teams finished as the state runner-up. — Andrew Swindle

The Morgan Academy boys and girls tennis teams each finished as runners-up at this year’s Alabama Independent School Association state tennis tournament at Lagoon Park in Montgomery this week.

Along with the runner-up finishes, Morgan senior Caroline Sherrer won the No. 1 seed for singles and doubles, capturing the doubles title with her sister, Emily.

Morgan’s Sophie Talton got runner-up for No. 5 seed in singles, and Sarah and Lizzie Reeves got runner-up in No. 2 seed doubles were some of the highlights for Morgan.

“I’m incredibly proud of this group, especially the seniors who’ve been incredible leaders for this team,” Stinson said. “They mean the world to me.”

Caroline finished her career with five singles championships and four doubles championships, and said this year was special for the bond formed between Morgan’s five seniors.

“It’s been really cool. I’ve been playing in state for seven years, and now that I’m a senior, I’m kind of sad that it’s over,” Caroline said. “That chapter of my life is over. It’s been great to really get close to my team. This year was different from other years because there wasn’t as much pressure to win. Baxter didn’t put as much pressure on us as a team, and he said it was more about having fun and bonding as a team since we have so many seniors where we’ve played since we were little together. It was a bonding experience. The pressure to win wasn’t on us, but I think that it made us play better overall even though we had a lot of tough competition.”

Lizzie, a senior, said she’s proud of the season the Senators had, but noted that she’s sad to see it end.

Caroline said this year was also special because she was able to win the doubles title with her sister.

“That was great. It’s my last year and it was her first title, so it was really fun and she played well,” Caroline said. “During the season, it was hard because we’re sisters, but at state we kind of stepped up and played really well. It was fun to encourage her and it’s really exciting because she’ll take my spot next year as No. 1 seed.”

Caroline added that tennis season usually marks the end of the school year, and it’s been among the best things this year.