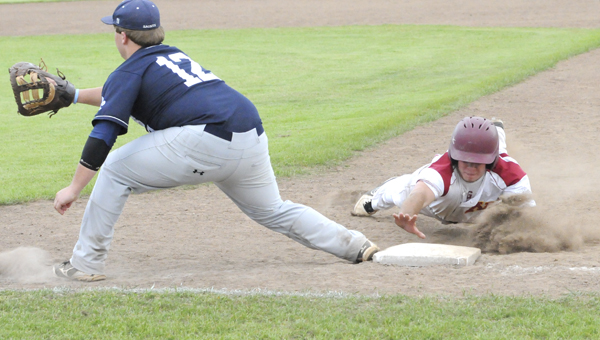 The Morgan Academy Senators put up enough runs for a senior day win, as they defeated the Patrician Academy Saints 5-4 at home on Tuesday.

Jeremy Carter, head baseball coach of Morgan, said the Senators’ seniors wanted to get a win in their final home game.

“It’s senior day and the seniors had a good time. They came out firing and had fun. That’s what baseball’s about,” Carter said. “They came out and hit the ball, played good defense. Webby [Hunter Webster], our starting pitcher, he’s a senior this year and he wanted it. They wanted to win on their home turf for the last time.”

The Saints jumped out to a 1-0 lead in the top of the third, but the Senators responded in the bottom half of the inning, as Trey Powe got a hit to shallow center field that allowed Trevor Bates to score from second and tie the game at 1-1.

Morgan took a 2-1 lead in the bottom of the fourth when Webster scored on a passed ball.

The Senators pushed their lead to 3-1 in the bottom of the fifth, as Powe drove in Bates again with another hit to shallow center.

Morgan added one more run in the bottom of the fifth inning when senior Matt McKinney hit a ground ball to center that allowed Powe to score from second and extend the Senators’ lead to 4-1.

Morgan’s final run came when Woodham Kemmer scored on a throwing error by the Saints, as Morgan was able to halt the Patrician comeback attempt.

Webster pitched a complete game for the Senators.

Morgan will take the field again Thursday at Wilcox Academy starting at 4 p.m.