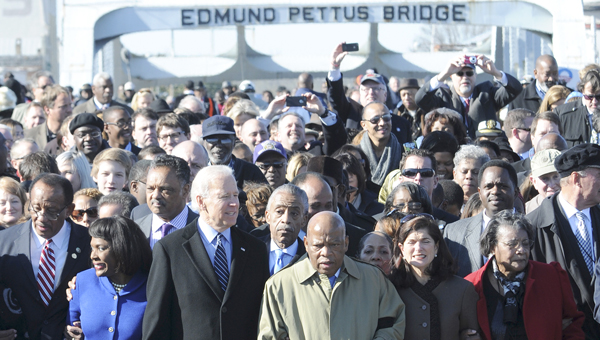 During his remarks at two events Sunday in Selma, Vice President Joe Biden mentioned his regret for not being a part of the civil rights movements in Selma and other parts of the Deep South.

Sunday, Biden had the chance to visit the iconic Edmund Pettus Bridge, the point where marchers were attacked on March 7, 1965, and beaten by law enforcement in their attempts to march from Selma to Montgomery. It would prove to become one of the key powder keg moments of the civil rights movement and is known as Bloody Sunday.

“I regret — and although it’s not a part of what I’m supposed to say — I apologize it took me 48 years to get here,” Biden said just moments before marching over the bridge with thousands of others. “I should have been here. It’s one of the regrets that I have and many in my generation have.” 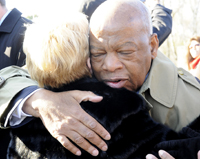 U.S. Rep. John Lewis (D-Ga.) hugs one of participants of Sunday’s bridge crossing re-enactment across the Edmund Pettus Bridge, which Lewis led along with Vice President Joe Biden. The group also included dozens of members of Congress and other government leaders. — Katie Wood

Locked arm-in-arm with U.S. Rep John Lewis (D-Ga.), one of the marchers beaten on Bloody Sunday, Biden joined in spiritual songs and listened as Lewis stopped the march at the point where he and others were attacked, detailing the vivid accounts of how he was beaten, where others were trampled by horses.

“Hosea Williams then said ‘Major, please give us a moment to kneel and pray,’ and then the major said ‘Troopers advance,’” Lewis continued. “You then saw these men putting on their gas masks. They came toward us, beating us with nightsticks or whips, trampled us with horses and then released the tear gas.”

Lewis said 17 marchers were hurt, many of them treated at Selma’s Good Samaritan Hospital. One of the nuns who treated the marchers, Sr. Antona Ebo, was seated in a wheelchair just 10 feet away from Lewis as he recounted the day.

“Most of us thought that the hatred the viciousness the bigotry that we’d seen in our own states had at least subsided,” Biden said reflecting on the accounts of Bloody Sunday he saw as a teenager. “What we saw was entrenched hostility and prejudice coming face to face with undaunted courage and resolve — a resolve so powerful that it inspired the Congress and the nation to support the Voting Rights Act just four months later.”

On Biden’s other arm was U.S. Rep. Terri Sewell (D-Ala.), who is a native of Selma, and the first black woman elected to Congress from Alabama. She was recently elected to her second term.

Barbara Howard, an original Foot Soldier and resident of Tuskegee, took part in Sunday’s re-enactment “for the cause of voting rights and civil rights. I’m here fighting for justice, freedom and equality again in 2013. I marched in 1965, and so I have returned.”

While Sunday was a return trip for many, it was the first time to Selma and to the Jubilee for many others.

“I’ve always wanted to come to this march, and since my son was old enough, I wanted to bring him so he could experience it,” Angela Morris, who is from Loxley and traveled to Selma with her son Dylan Parnell.

Biden’s speech and the atmosphere of the Jubilee also inspired Ed Wayland, who brought his wife Baur, and their children, to Sunday’s speech and re-enactment.

“What they proved was that it didn’t work and the United States and the world changed as a result,” Wayland said. “One of the greatest things people have done, happened right here on this bridge.”

“We want to remember our history, and we’re still working towards issues that are affecting us today,” 22-year-old Jenekwa Harrison said, wearing a T-shirt that bore the slogan “Never Forget Bloody Sunday.”

“This is about making this a movement, not a moment,” 20-year-old UAB student Brittanie Muse said. “So let’s go home tomorrow and not just back to our daily lives. Let’s keep this movement alive and going.”

Surrounded by other dignitaries, including members of the Congressional leadership, U.S. Senators and civil rights leaders such as Rev. Jesse Jackson and Rev. Al Sharpton, Biden joined in as the crowd sang, “We Shall Overcome,” as the march came to an end on the Selmont side of the Edmund Pettus Bridge.

An estimated 15,000 marchers took part in Sunday’s crossing, a crowd Selma Police officials said was larger than in years past.

Vice President Joe Biden is scheduled to speak at a Unity Bruch at Wallace Community College at noon and then... read more