Rescued dogs off to New York 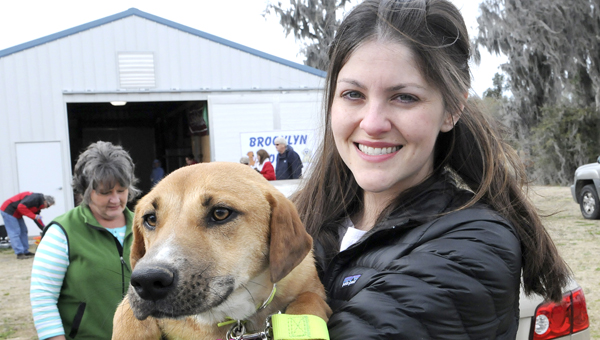 Bonnie Hobbs of Selma holds her foster dog before putting her in a van to go to an adoption rescue in New York along with 16 other Selma Animal Shelter dogs. — Ashley Johnson

Some tears were shed as animal foster parents kissed their foster dogs goodbye and sent them on a bus to New York — the dogs of course licked back, some of them resisting to get in the bus by tugging on their leash.

“But I know they are going to great homes,” Bonnie Hobbs said, who said this is her third time fostering a dog with Wannabe Rescued.

Seventeen dogs from the Selma Animal Shelter roamed around the back barn area of Valley Creek Animal Hospital on Friday afternoon for a send off party. All of the dogs were headed to New York, thanks to three dog rescues up north that were in contact with Shannon Lynch, Central Alabama Animal Shelter board member.

The shelter has been in recent headlines as it is operating at full capacity and has not accepted any new animals since late 2012.

“We didn’t just save 17 dogs today, we saved 34,” Lynch said, explaining that every time animals are taken off of adoptable row, that means one animal in line for euthanasia is allowed to move into the adoptable section. “Not only do you save that dog, you’re saving the one that is taking its place. Without fosters, none of this would have happened because the dogs have to be out of the shelter for a minimum of two weeks to make sure they get all of their medical stuff and its just mandatory. If there is one thing we can learn from this right here, its to get the word out and anybody who is thinking about getting a dog but they don’t want to commit to it yet, fostering its not a long time — its only two to three weeks.”

She said the shelter board as well as the city have all come together to make the rescue possible.

Lorraine Alexander helps run an organization in Selma, Wannabe Rescued, that posts pictures of animals in the Selma Animal Shelter and locate rescue groups that will take them to other parts of the country so that euthanasia is not their fate.

“This is the biggest pull that Selma, Alabama has ever had,” Alexander said. “We don’t expect this many dogs again at once [to be pulled] but we plan on doing more and we can only do as many animals as our fosters will let us.”

To learn about fostering an animal for a two to three week period so that it can be adopted through a rescue, contact Wannabe Rescued to join their foster network at wannaberescued@aol.com