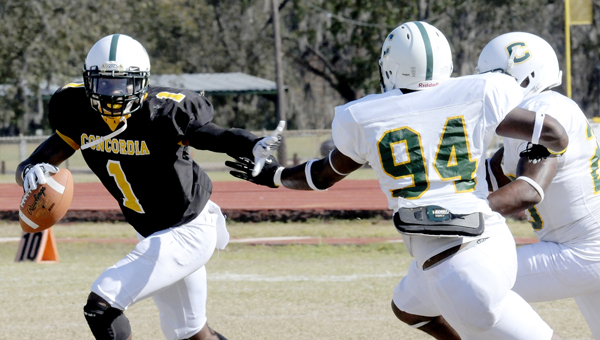 With this year’s college football national signing day in the books, the Concordia College Alabama Hornets welcomed 34 new players to the program.

The Hornets signed players from all around the South, including Alabama, Georgia, Mississippi and Tennessee.

Don Lee, head football coach and athletic director of Concordia College Alabama, said the team addressed a lot of needs on signing day, but are still looking to fill some remaining holes.

“We haven’t reached it yet, but we’re getting there,” Lee said. “I’m looking for a quarterback, and we’re always looking for linemen. And I think that if we get those things, we should be OK.”

The Hornets were able to pull multiple players out of a few areas.

Lee says it’s a good thing for Concordia to have a presence in states and cities all around the region.

“I think that’s a part of me being able to know a lot of coaches because we weren’t really able to get out to some of the people we know that I’ve known for a long time,” Lee said. “It says a lot for Concordia College being able to reach out into a lot of the different cities and states.”

Lee said the Hornets were able not only to get good players, but they also got good students.

“We reached a lot of talent, but not only talent, we got some student athletes,” Lee said. “We’ve got a lot of high test scores and all of that.”

Of this year’s recruiting class, 19 players are on the defensive side of the ball.

Other highlights of the class include five wide receivers and four running backs.

Lee said it’s going to be important to get the incoming players ready with offseason workouts to prepare for next season.

“It’s very important,” Lee said. “We really hadn’t set up the summer workouts yet, but getting them on board in the middle of July getting them ready to play this year will be important.”

Bears all business in blowout win