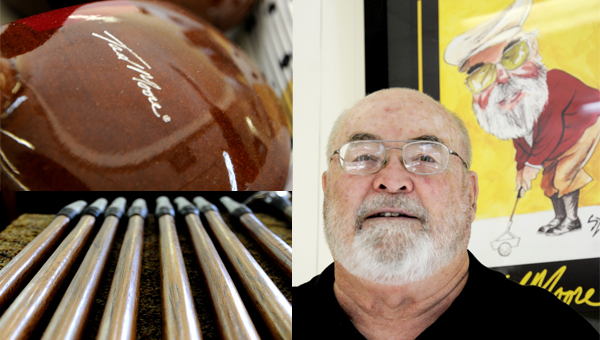 Tad Moore will be inducted into the Toledo Hall of Fame Wednesday. Tad is a world renowned golf manufacturer and designer, now most notably known for his hickory shafted clubs. -- File photos

World renowned for his famous golf clubs and putters, Tad Moore will now be honored by a place he calls home.

Moore will be inducted into the 14th Toledo Hall of Fame class on Wednesday at the Toledo Country Club in Toledo, Ohio.

Moore, a native of Toledo who now resides in Selma to produce hickory putters and other golf equipment, said it’s a great honor to be inducted alongside other well-known people and golfers from the Toledo area, such as Peggy Kirk Bell, Byron Nelson and Art Hills.

“The Toledo Hall of Fame has a golf portion … I’m really honored to be getting inducted into it,” Moore said. “As I look at these people already in it like Jamie Farr, who, of course, played in M*A*S*H and immortalized Toledo for the hot dog stand where he grew up as a kid, and he has a ladies golf tournament up there. He’s there because of all that. Art Hills is there because he’s a famous designer of golf courses, and I guess I’m getting in because I’m a world-famous golf club designer. So I’m real honored they’ve asked me to be a part of it.”

“To me, I think it’s really kind of a double thing because, one, I’m being honored by this town where I grew up and the people up there and they think enough of what I’ve accomplished in my golf career that I should be honored with it,” Moore said. “Secondly, you have to get nominated for it, so someone felt I met the criteria.”

And while Moore, now 71-years-old, doesn’t get many chances to go out to Toledo, he said he’s happy that the time has come for him to make a return visit.

“I’m glad that they’re doing it before I pass away,” Moore laughed. “That’s a terrible thing to say, but I am really looking forward to enjoying it because I don’t get back there as much as I used to. It’ll be very interesting to see the people.”

Moore added that one of the things he’s taken joy in over the years in his work producing clubs, is just how much people have benefitted.

“The big thing is that I’ve come to realize over the last five or six years is that my work has brought about a lot of pleasure to people, and I’ve never really looked at it that way,” Moore said. “To me, it was I get a lot of pleasure out of it, but now as I’ve gotten older I get people that call me and they want a new this or that, or ask can I fix their old golf club or putter or whatever, I’ve found is that really — what to me now is more satisfying, is that I’m really giving pleasure to a lot of people through the enjoyment of the game of golf, and that means a lot to me.”

Concordia running back Treval Adams runs for a touchdown during the second quarter of Saturday’s game against the Virginia-Lynchburg Dragons... read more