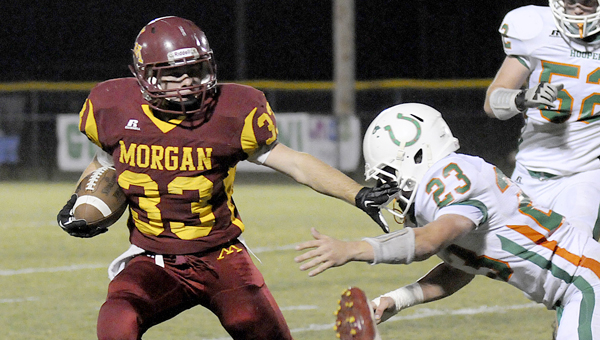 For Morgan, the size and strength of the Hooper Academy Colts proved the deciding factors in their regional matchup at Senator Field; a matchup that saw the Senators both lose the game and lose any chance of making the playoffs.

Hooper Academy beat Morgan 27-14 to not only end the playoff hopes for Morgan, but clinched a playoff berth for themselves.

But despite the noticeable size difference, Morgan was able to overcome a turnover and broken coverage to head into halftime tied at 14. It was the second half where Hooper took over, running the ball at will against a Morgan defense that appeared not to be able to go toe-to-toe with the larger Colts.

“It was a hard fought ball game. They came out, they’re big and strong, and ran right at us,” Morgan head coach Bob Taylor said. “That’s kind of been our weakness all year long.”

After starting the season off 3-0, the Senators have now lost four straight.

“We move on to continue to develop our players and our program; focus on giving our seniors a chance to finish out strong,” Taylor said. “As painful as these lessons are, we have to take them and grow from them.”

Trevor Bates and Jamie Bearden each had running touchdowns for Morgan in the first half.

Morgan will take to the road the next two weeks, traveling to Monroe and Clarke Prep, returning to Senator Field for the final game of the year against rival Lowndes Academy on Oct. 25.

By Andrew Garner The Andalusia Star-News   OPP — Opp caught four interceptions and got a fumble recovery in a... read more