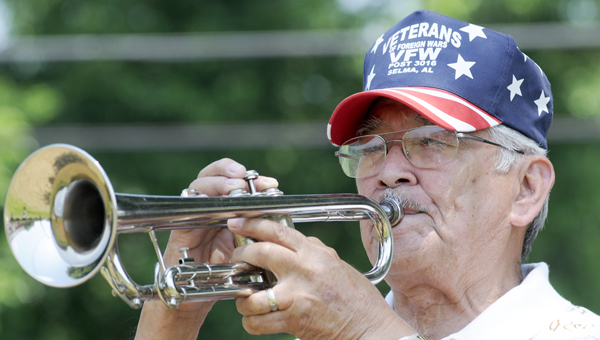 Jesus Sanchez plays taps during the annual Memorial Day ceremonies at Memorial Stadium last May. The event will be held once again this year, set for Monday at 11 a.m.

To commemorate the Americans who have given their lives in service to ensure the United States remains free, including the 140 who have died from Selma and Dallas County, the city has planned a Memorial Day ceremony and moment of silence Monday.

Beginning at 2:35 p.m., community members can join elected officials, veterans and families of those who have died on the steps of City Hall for a ceremony that will include the reading of the names of the 140 servicemembers who have died from the area.

Then, at 2:59 p.m., sirens will sound to signal an impending moment of silence to remember the lives of those lost. The citywide Moment of Remembrance will last from 3 to 3:01 p.m., with the playing of taps signifying its conclusion.

“We ask everyone to pause to honor and remember those who gave their lives defending our country,” Selma Mayor George Evans said. “This is a chance for us to say thank you to all those who have made freedom possible and thank God that we’re a free country.”

Of the 140 Selma and Dallas County servicemembers who died serving the country, 43 died fighting in World War I, 79 died in World War II, six in the Korean War, 11 in the Vietnam War and one in Afghanistan, according to numbers provided by the mayor’s office.

“The freedom we enjoy is because of those who have sacrificed so much,” Evans said. “It’s important to take time out of your day to thank both them and their families.”

Prior to the city’s ceremony, the Veterans of Foreign Wars, with its Ladies Auxiliary, will host a ceremony at Memorial Stadium at 11 a.m. Cmdr. Rayburn Hill of VFW Post 3016 will be the master of ceremonies and Probate Judge Kim Ballard will serve as the event’s guest speaker.

Hill said the ceremony, which is free and open to the public, will feature the Post 3016 Honor Guard and numerous other veterans and civic organizations who will place flowers on the memorial.

“We want to teach our children and all those coming up after us that Memorial Day isn’t just about picnics and cookouts,” Hill said. “It’s about remembering those that gave their lives—paid the ultimate sacrifice—so that this country could be free.”