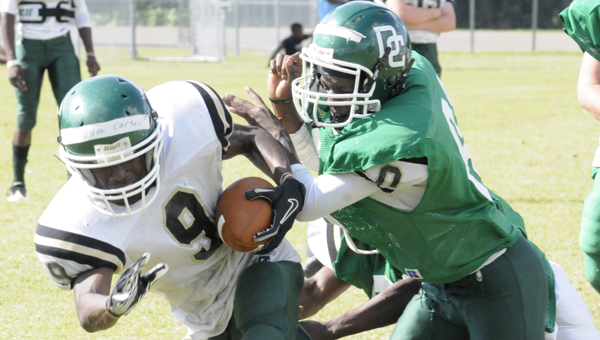 The Dallas County High School football team recently lost its head coach, but the Hornets are hard at work preparing for the 2012 season.

Despite the resignation of Willie Moore as head football coach, the Hornets began spring practices as scheduled earlier this month.

Chris Littleton, who is serving as interim head football coach for Dallas County High School, said the Hornets have been working mainly on putting in a new offense as they prepare for their spring game against Central High School in Coosa County on Friday at 6 p.m.

“We’ve changed some things up offensively, so we’ve been primarily working on offense,” Littleton said. “Spring game, we’re not allowed to do a whole lot defensively — we agreed with the other school that both schools would play base defense — so primarily we’ve been working on getting our offense installed, trying to find where some personnel can go.”

Littleton said the Hornets have also just been finding out who they are, as they have about 70 players total participating in spring practices — a lot of which are newcomers.

“We’ve got a lot of new kids out this spring, so the first week was a lot of finding where people can play,” Littleton said. “The kids have been working real hard. They seem to be buying in to what we’re teaching them and they seem to be real excited. We’ve got probably more kids out here than we’ve had in a couple of years.”

Littleton said the coaching staff has been pleased with the players’ effort and the team is getting better with each practice.

“I think it’s been real good. The first couple of days it looks like the first couple of days of spring and nobody comes in looking sharp, but by that third day some of these kids started hitting their stride,” Littleton said. “We’ve been real pleased with them as coaches. We’ve been real impressed with the effort and how quickly they’re picking things up. We’ve got some skill players we feel like can really help us next year, and they’ve picked up real quick, and the offensive line’s picking it up and following suit.”

Keith to play host to Selma, St. Jude in jamboree

During a fall jamboree between the two teams last August, Keith running back Charles Johnson (21) looks up field against... read more