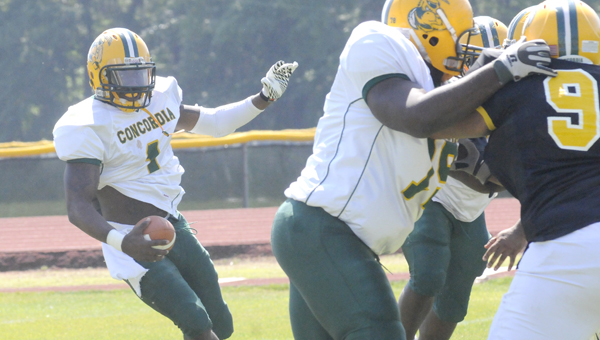 Concordia quarterback Keith Ray scrambles away from a defender. Concordia’s offense faced off with its defense in two 30-minute halves Saturday. -- Robert Hudson

The Concordia College Hornets football team took the field Saturday to prepare itself for Saturdays in the fall.

The Hornets held their spring game Saturday at Memorial Stadium, as offense took on defense.

“I think they’ve done a wonderful job this spring,” Skanes said. “They’ve worked hard and did what we asked them to do on the field and off the field and in the weight room.”

Skanes said he’d give the Hornets a C-plus overall for the spring, and the spring game doesn’t mark the end of spring practices.

He added that the team’s performance in spring practices and the game doesn’t necessarily reveal how good the team will be in the fall due to a number of different factors.

“A lot of the time in the spring, you don’t get a true look … because you’ve got a lot of stuff you’re looking at and you’re giving everybody an opportunity with stuff you’re trying to get out the way and see where you’re at,” Skanes said. “You’re trying to see who matures, who develops, and you’ve got a lot of walk-on guys that were out here who we’re teaching, so this is their first live action with the referee out there. We had young quarterbacks out there, and we had some people we were trying at positions for the very first time.”

The Hornets offense scored two touchdowns in the second half, the first coming on a touchdown pass in the red zone from quarterback Carlos Young to receiver David Hampton, and the second touchdown came on a three-yard run by quarterback Keith Ray.

The Hornets defense was no slouch, as it held the offense scoreless in the first half, including a number three and outs and forced fourth downs.

Skanes said it’s going to be tough for the defense as defensive coordinator L.C. Cole is leaving, but he expects defensive line coach and assistant athletic director Don Lee to do a good job as he takes over that position.

“It’s going to be hard on my defense because we’re losing our defensive coordinator,” Skanes said. “Coach Cole is leaving, but Coach Lee is going to step in at the coordinator spot and is going to pick it right on up. I really feel like the strength coming out of this will be our defense. Offensively, we looked good on the running side with Ronday McClain. He’s going to be a positive note for us.”

Ronday’s brother, former Alabama fullback and current San Diego Charger Le’Ron McClain, spoke to the Concordia players after the spring game about the importance of academics.