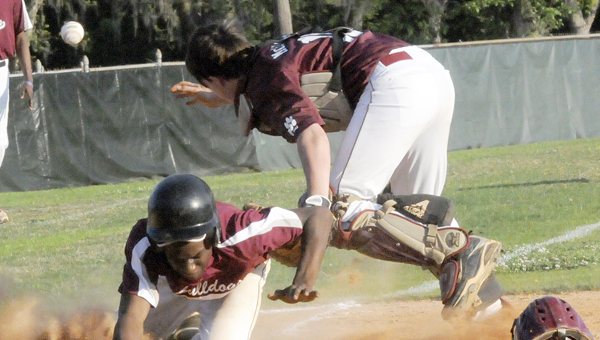 The Selma Middle CHAT Academy Bulldogs suffered a tough loss in the first game of their doubleheader, but bounced back in the second game to defeat Prattville Junior High School 7-2 Thursday at Bloch Park.

Steven Washington, head coach of the Bulldogs (5-7), said his team played together in the second game after a first game where they made one too many mistakes.

“In the second game, our offense came around. We played all the way through, we played together and we picked it up on offense,” Washington said. “The guys came out and matured as a baseball team. We’ve just got to keep that game-winning attitude going and keep that momentum going.”

Washington said left fielder Achilles Rutledge made a pair of big catches in the outfield that help stop some runs and kept the Bulldogs ahead in the game.

The win helped the Bulldogs bounce back from a 20-7 loss in game one that saw them nearly mount a comeback.

In the second game, the Bulldogs were trailing 12-1 in the bottom of the third inning when a sac fly by Ladarius Woods allowed Fred Richardson to tag up and score from third base to make it a 12-2 game.

The Bulldogs continued to fight back when Rutledge hit a ball to left field that rolled to the wall, allowing Rutledge to round the bases and beat the throw at home, as he slid in for an inside the park home run, making the score 12-3 in the bottom of the third.

The Bulldogs weren’t done, as Ryan Snell singled, allowing teammate Ryhiem Eaton to score from second base and make the score 12-4.

CHAT was able to capitalize off of Prattville’s mistakes in the bottom of the fourth inning, as consecutive wild pitches allowed Bulldogs Jalen Johnson and Moorer to score and make it a 12-6 game.

The Bulldogs got another break when Prattville overthrew the first baseman, allowing Richardson to score from third and make it 12-7.

But the Bulldogs couldn’t hold on, as Prattville reeled off eight runs in the top of the fifth.

The Bulldogs will play again Friday when they travel to Centerville, and their next home game is April 5 at Bloch Park.