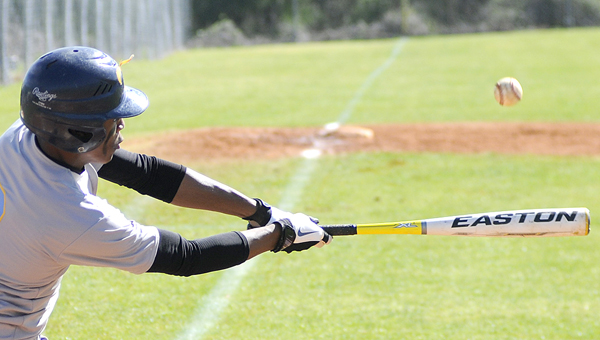 Selma’s Davian Brantley gets a hit against the Dallas County Hornets Saturday in Plantersville. -- Robert Hudson

The Selma Saints took an early lead, but the Dallas County Hornets came back and held off a late comeback attempt to win 4-3 at home on Saturday.

“We got one more hit than they did, and I think that determined the ball game,” Moore said. “Our pitchers pitched real well. Both teams played really good defense. It came down to us getting one extra hit than they did.”

Selma (0-4) went ahead 2-0 in the top of the first inning when Cornelius Woods hit a shot to deep left that bounced off the top of the fence and scored KeyShaun Ford and Sherron Lindsey.

The Hornets (10-0) fought back in the bottom of the first, as Kevin Simmons scored from third when the Saints tried to catch a runner stealing at second base, making the score 2-1.

Dallas County tied the game at 2-2 in the bottom of the first when Justin Moreland scored from third on a fielder’s choice.

The Hornets took the lead when Simmons doubled and drove in a Clay Copeland and Dontae Stiles to make it a 4-2 game in the bottom of the second.

The Saints responded when Eddie Thigpen singled and drove in Woods from third to make it a 4-3 game.

The Saints had one more shot tie or take the lead in the top of the fifth and final inning, with runners on first and second, but Thigpen popped out to right field for the final out of the game.

Reggie Glover, head baseball coach of Selma, said it was another close loss for the Saints, but that’s a part of the process of building up a young team.

“I’m impressed with the effort by the kids,” Glover said. “I had to tell them (players)—Tuesday and Thursday we lost two close ones in Montgomery also—it’s growing pains. The bulk of our team are 10th graders, so it’s growing pains. We’re just going to continue to grow and learn how to close out games.”