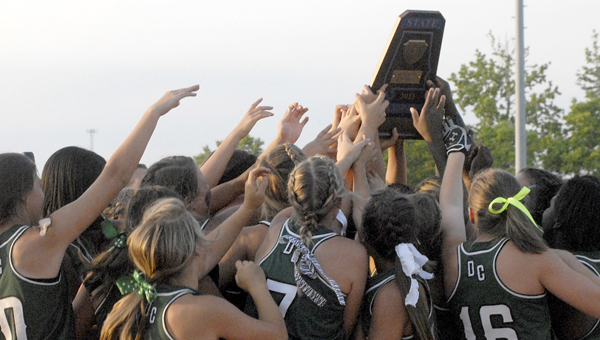 In May 2012 the Dallas County Lady Hornets claimed the Class 4A state championship with a win over Cherokee County. The Lady Horents enter the 2012 season as defending champions in name only as they have to find replacements for all but one of their starters from the title team. -- File Photo

PLANTERSVILLE — The first week of the 2012 season for the Dallas County Lady Hornets has not gone exactly how the team finished the 2011 season. Then again, only one starter remains from a team that won the Class 4A state championship.

For first-year head coach Robert Watson, he takes over a program he says is the defending state championship in name only.

“I know that we are the defending state championship in name, but of the two players that had any significant playing time last year — only one is available right now,” Watson said, adding another veteran will likely join the team in the coming weeks. “So, a lot of people will say that we are the defending state champions, but this team really hasn’t won anything yet and we’ve got to take care of that. We’ve got to get back to that level.”

In an effort to get his young team experience, Watson has packed the team’s schedule, arranging for the Lady Hornets to play in seven tournaments and 18 games, the maximum in each.