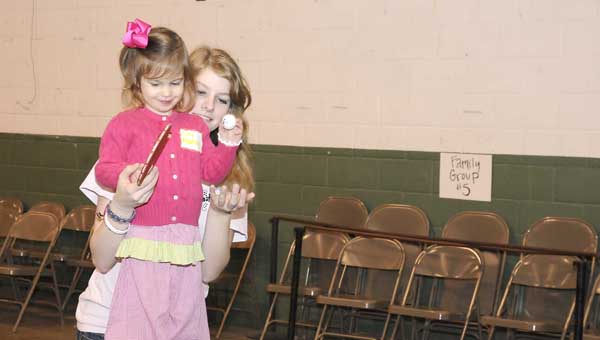 Taylor Speed helps Lilly Frances Edwards work on her ping pong skills during Saturday’s Block Party at the Lion’s Park. Though conditions were rainy, more than 50 students from kindergarten through fifth grade showed up for an afternoon of fun. -- Rick Couch

Saturday’s heavy downpours did nothing to wash away the fun from the City-Wide Block Party at Lion’s Fair Park.

More than 50 kindergarten through fifth grade students from all over Dallas County gathered to enjoy snow cones, cotton candy and a number of activities with area teenagers and parents as part of an annual retreat hosted by Church Street United Methodist Church.

Rand Smith, director of youth and college ministries, said he was concerned when the wet weather arrived, but pleasantly surprised when children lined up at the door for registration.

“We were pleasantly surprised,” he said. “We had planned on having it outside, but because of the weather we had to change a few things. There was still a great turnout.”

Though the event moved indoors, it didn’t lessen the capabilities of the party or the enjoyment.

It also didn’t slow the teenagers who participated from sending a positive message to those in attendance.

Participating teens like Bethany Keel said the block party is a chance to show younger students the path to success.

In the past, stars like Jai Miller have attended Reading is Fundamental events to encourage children to pick up books.... read more