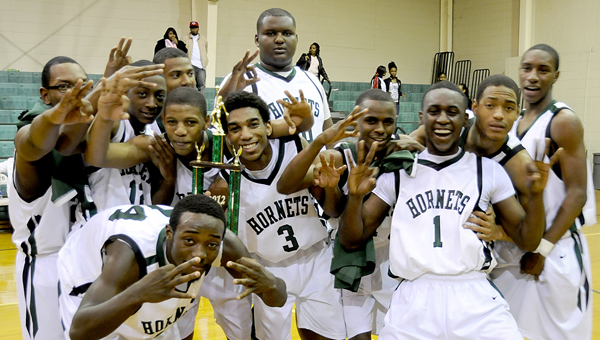 Despite falling behind early and struggling to take control, the home standing Dallas County High School Hornets found a rhythm in the second half of Monday night’s area championship game to take a 53-45 win over Southside.

Competing for the 4A Area 6 title was difficult enough, but when a county rival was thrown in, the pressure was at a fever pitch. Fortunately, head coach Willie Moore said his team never lost focus.

“It was very important that we came out and played for four quarters, and I thought they did that tonight,” he said.

Though the players felt pressure to put away their rival, Moore said in reality, the game had less pressure than it seemed because the Hornets would have still been alive in the postseason with a loss.

“Tonight wasn’t a must-win situation,” he said. “Win or lose you have to win on Friday night. It’s a one –game season now.”

The Hornets (23-4)  did not start the game as dominant as they finished. Southside controlled the ball for most of the first quarter behind Mario Oliver, who led the team with 12 points. The Panthers built a 17-16 lead by the end of the opening stanza and appeared to be in control.

The two teams were evenly matched in the second quarter, which is the way they ended the half. Dallas County kept pace with Southside and finally tied the game at 25 before the break.

Markell Harris, who had 12 points for the Hornets, opened the third quarter with two free throws that ignited a 10-point run for Dallas County to build a 35-25 lead, which the Hornets never relinquished.