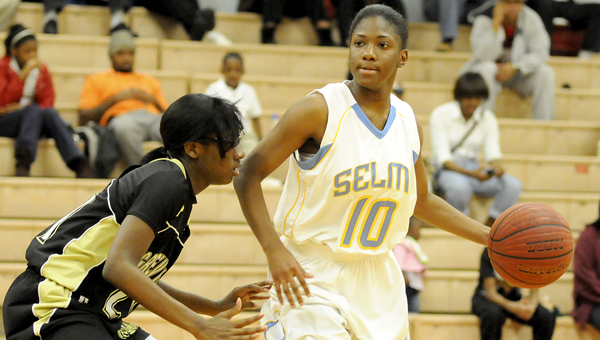 With three minutes left in the halftime break, the clock operator sounded the buzzer. There was no response from the Selma locker room.

With one minute left, the buzzer sounded once more, and again no response from the Selma lock room.

With roughly 15 seconds left, the Lady Saints appeared from their locker room, sent their five starters to the floor and went about the job of simply blowing out the Greenville Lady Tigers 67-26.

“There was a few of them I had to get on to during halftime,” Selma head coach Anthony Harris said. “I had to let them know that this is the playoffs — this is the postseason — and our play has to be better. It is win or go home time.”

The tough words from Harris would be surprising to some as the outcome of Thursday’s opening round game of the Class 5A Area 5 tournament was never in doubt. At one point in the second half, the Lady Saints led by as much as 51 points and the defensive pressure they threw at Greenville was suffocating and forced countless turnovers that led to easy baskets.

If wasn’t for somewhat sluggish play and foul troubles for some of his key starters, Harris would not have had much to complain about.

“When we can stay out of foul trouble, when we can play our game, we are hard to beat,” Harris said of his team that now moves on to Saturday’s tournament title game with a 23-3 record. He also has a chance to take a team that will be well rested.