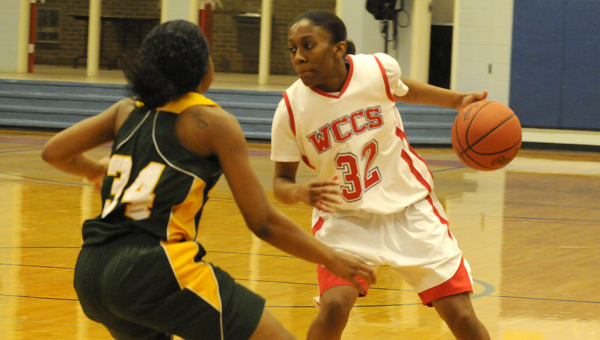 In a battle of the No. 1 and No. 2 teams in the Southern Conference, it was the Wallace Community College-Selma women who pulled away for a 68-55 win.

Despite the final score, the game was a back and forth battle for most of the first and second halves. It was in the final minutes that Wallace began to pull away.

The late surge continued when Ebony Smith, who led the Lady Patriots with 18 points, hit a buzzer-beating three-point shot as time expired.

The key to the game, head coach April Harper said, was getting the team back to the basics.

“We started to play our ball game,” she said. “Players started to swing the ball around a lot better, and we were able to penetrate the defense and get more lay ups. It slowed the pace down some.”

After trailing for a portion of the second half, the Lady Patriots went up 61-60 and shot well enough from the free-throw line to hold the Lady Wildcats off.

The win was especially sweet because it keeps Wallace undefeated in the conference, Harper said.

Soon, the Lady Patriots, who improved to 10-4 on the season, begin a brutal road stretch where they will not see the home court until March. Every game they play in February will be on the road.

The win, Harper said, gives them momentum heading into the tough run.

“I’m so proud of them and the support staff that comes out to watch this team,” she said.

“We just happy everybody is behind us. We’re excited, the girls are excited and we can’t way to see how far we can go.”

Ashley Grimes chipped in 18 points for Wallace, followed by Jibria Hooper with 12.