Trojans hold on for victory 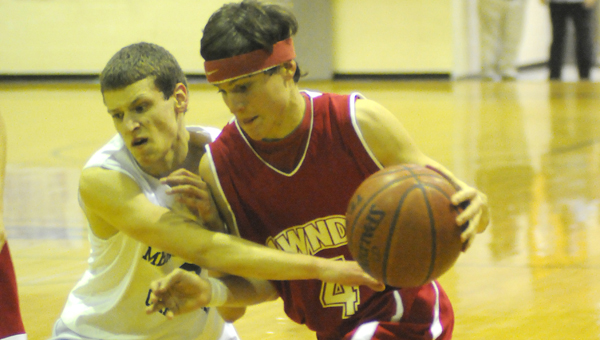 Meadowview Christian School’s Taylor McNeil tries to slow down Lowndes Academy’s Hank McIntosh during a 43-42 Trojan victory that went down to the wire. -- Robert Hudson

It came down to the last shot of the game, as the Meadowview Christian School Trojans were able to hold on and defeat the Lowndes Academy Rebels 43-42 in an area game at home on Tuesday.

“Defense, defense, defense. That was our key to victory,” Jones said. “We held them to 19 points in the first half and only 23 in the second half. We played great defense, we hustled and made key shots when we had to.”

After a missed shot by the Trojans, the Rebels had the final possession of the game.

With time ticking down, Lowndes’ Garrett Headley attempted a potential game-winning shot from mid range, but it rolled off the rim as time expired sealing the victory for the Trojans.

The Trojans took a 22-19 lead into halftime and jumped further ahead on a strong third-quarter performance from Dylan Lawrence, who scored 12 points on four three pointers in the quarter.

The Rebels’ late 9-0 run included a three from Hunter Johnson, a pair of scores under the basket from Wesley McMicken and a basket from Headley.

Lawrence led the Trojans with 24 points, while Travis Stacey added 11 points for Meadowview.

Headley and McMicken led the Rebels with 10 points each.

In a game that went beyond regulation, it came down to who made the most shots in crunchtime, as the Lowndes Academy Rebels defeated Meadowview 42-36 in overtime on Tuesday.

Elyse McIntyre, head coach of Meadowview (2-13, 0-4), said her team just didn’t do what it needed to in order to get the victory.

“I just think we really lost control of who we had on defense,” McIntyre said. “I think we got a little too complacent, didn’t play a full game … and just didn’t get it done.”

A pair of successful trips to the charity stripe by Katey McIntyre put Meadowview ahead 29-25 with 2:14 remaining in regulation.

Both teams had a possession and a chance to go for the winning basket, but neither got a shot off, sending the game into overtime.

The Rebels took an early lead in the extra quarter as Bell hit one of two from the free throw line, McCordy hit a pair of free throws and Abby Pitts scored on a fast break layup to make it 36-31 Rebels halfway through overtime.

The determining factor in overtime was shots from the field as the Rebels made three two-point baskets in overtime.

Both teams made seven free throws in overtime, but the Meadowview did not score from the field.

Bell led the Rebels with 16 points and Pitts added 11 points for Lowndes. Both Meadowview teams will take the floor again on Thursday when they travel to play Evangel Christian Academy in Montgomery at 4 p.m.

With the new year underway, local high school basketball teams are shifting their focus to the heart of their schedules—the... read more