Morgan teams get back to work 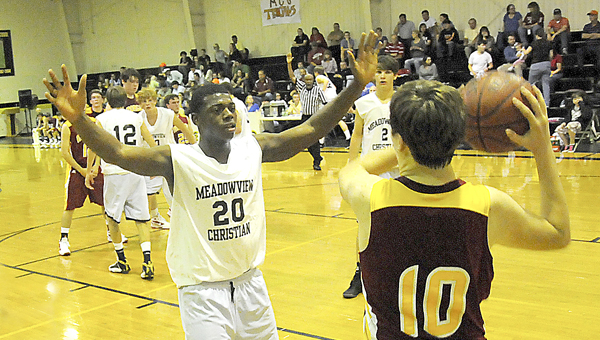 After breaking for the holidays, the Morgan Academy Senator basketball teams will be back in action. The Senators will host the boys’ and girls teams from Clarke Prep, Southern Academy, and Hooper Academy for the annual Pepsi Classic. -- Tim Reeves

With Christmas Day behind them, it’s back to work for the Morgan Academy Senators’ boys and girls basketball teams, as they prepare to welcome a few opponents to Selma.

The Senators will host the Morgan Pepsi Classic basketball tournament on Wednesday and Thursday, which will include the boys and girls teams of Hooper Academy, Clarke Prep School and Southern Academy.

Admission is $5 and concessions will be available.

“I think it’s going to be good for us as far as helping us get back in the groove after a few days off and having teams come into our facilities and play,” said Morgan boys basketball coach Bob Taylor. “We just hope everyone comes out and enjoys some basketball.”

Taylor, whose boys team sits at 5-4 on the season, said the tournament will prepare the Senators for the upcoming start of area play.

“This will be the fourth tournament we’ve played in this year, so we’ve done about as much as you can with tournaments,” Taylor said. “Right now we’re just trying to continue to get better and this will kind of give us a jump start into January when everything starts to count a little bit more as far as region play.”

Taylor said the tournament will also give his team a chance to improve on its already solid defensive play and its play on the offensive end of the court.

“We’ve played pretty decent defense throughout the year and we’ve got a lot of areas to improve on that,” Taylor said. “Offensively, it just boils down to us being able to shoot and take care of the basketball. When we’ve taken care of the basketball and limited our turnovers we’ve been able to stay in ball games, but when we’ve turned the ball over we’ve had trouble staying in basketball games. That’s a big part of it in any game you play in, whether it’s football or basketball, if you turn the ball over you’re not going to win.”

Morgan Academy’s Parker Hughes (2) led the Senators during the 2011 season with his punishing running style. Part of that... read more