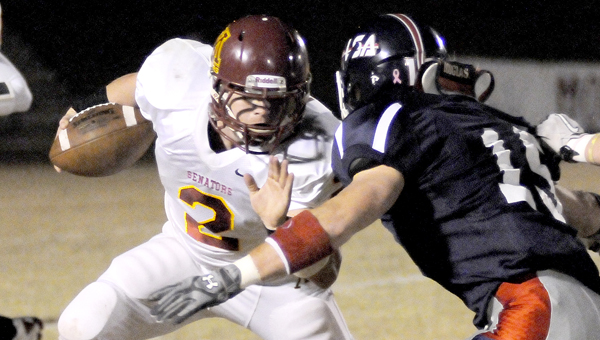 Morgan Academy’s Parker Hughes (2) led the Senators during the 2011 season with his punishing running style. Part of that effort was evident during the Senators’ first-round playoff victory over Lee-Scott Academy in November. -- File Photo

Being a team’s most valuable player extends beyond putting up the big numbers and scoring touchdowns. It also includes selflessness, sacrifice and leadership.

It’s those qualities that helped running back Parker Hughes carry his team to the Alabama Independent School Association state semifinals this past season.

“We’re big proponents of teamwork and he helped us create that,” said Brian King, who served as head coach for Morgan this past season. “He got his guys motivated to do a lot of things that without it, they wouldn’t have been capable to do, and it allowed him to be better and allowed our team to be better. You add that leadership factor in there and the hard work ethic, it just made him have an outstanding season and an outstanding career. We couldn’t do a lot of things without him.”

Hughes became known for his punishing running style and his 200-yard rushing performances that often lifted the Senators to victory, but he always credits his teammates for his success.

“It was my last year and there are a lot of great running backs who came through Morgan Academy and I wanted to put my name up there,” Hughes said. “I always say, I couldn’t do it without my guys blocking for me, especially the line.”

Perseverance is also something that defines Hughes.

Hughes said he didn’t want to miss a game and always wanted to be there for his team because they’d do the same for him.

“They’d do the same for me, they’d stick their necks out there as far as I’d stick out mine for them, and that means a lot to me,” Hughes said. “So, I just try to take it a step further and show them that I can do what I can do to help them.”

The Senators fell short of a state title, but for Hughes, it’s a group of teammates he wouldn’t trade.

“We had 27 or 28 players on our whole roster and that’s not a lot, we had to play both ways a lot, we had a young team, we had nine seniors,” Hughes said. “I wouldn’t want to be on another team. We had so much team chemistry and we got so close during the year. Coach King did a great job with us, coach Taylor, all the coaches, coach Rob, they did a great job with us, brought us together and made us a good team.”

Coach of the year: Crum building a dynasty

The Times-Journal has named Keith High head football coach Harry Crum as the 2011 coach of the year. -- File... read more