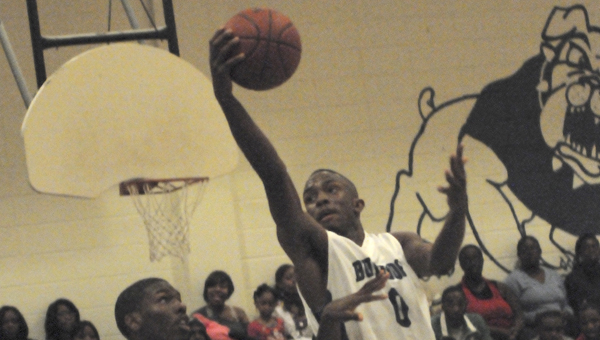 Above, Travaris Williams goes up for a shot over Wallace Community College defender Bobby King in the Bulldog’s 76-66 win Saturday night. -- Robert Hudson

The Selma University Bulldogs got up big early and didn’t look back, as they defeated the Wallace Community College-Selma Patriots 76-66 Saturday at home.

The Bulldogs (2-6) outplayed the Patriots (1-6) early on, and held off a late comeback attempt.

“I told my guys, if we’re patient and run through the offense, everything would go in our favor,” said Jeremy Fortune, head coach of the Bulldogs. “That’s what they did tonight. They were patient, they went through the offense and we came out with a victory.”

The Bulldogs got up by as much as 19 points in the first half, and would take a 40-24 lead into halftime.

After shooting a dismal 32 percent from the field in the first half, the Patriots would hit 47 percent of their shots in the second half and slowly climb back into the game, getting to within 12 points at 71-59.

But it was too little, too late, as Wallace was forced to foul the Bulldogs in order to extend the game with time running out.

Ronald Lane, head coach of the Patriots, said his team just couldn’t put a full game together, and the Patriots’ youth showed.

“It was just a young team failing to put together 40 minutes,” Lane said. “If we can ever put 40 minutes together, we’ll be fine. Some games we play the first half and not the second half and vice versa. Right now, we’ve just got a young team trying to put it together.”

The Patriots outscored the Bulldogs 42-36 in the second half, but struggled from the free throw line going 11-25 from the charity stripe. The Bulldogs held a 40-38 edge on the boards and would go 26-39 from the line, and would hit 47 percent of their shots from the field. Adrian Nelson led the Bulldogs with 20 points and Travaris Williams added 17 points for Selma University.

Bilal Richardson led the Patriots with 15 points and Dupre Rivers added 13 points for the Patriots.