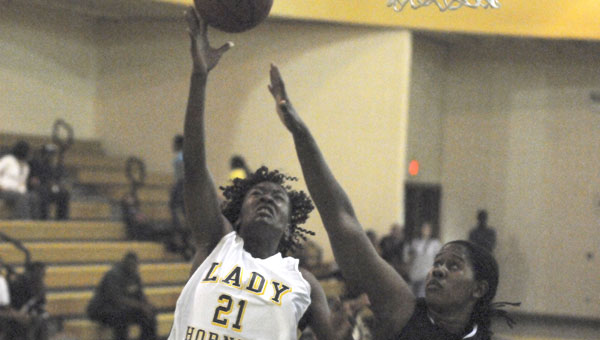 Concordia College’s Teresa Hill goes up for a shot over Faulkner’s Brittney Carter. The Lady Hornets were unable to hold on to a late lead and eventually fell 66-64 in the game. -- Robert Hudson

The Concordia College Hornets’ women’s basketball team was up by as much as ten points with 6:00 remaining, but they couldn’t hold on, as they fell 66-64 to the Faulkner Eagles at home Monday night.

Concordia associate coach William Waheed said the Hornets were slowed toward the end of the game due to prior injuries.

“We had a couple of girls that were hurt,” Waheed said. “We’re not offering any excuses, but we had a couple girls that were hurt and they were kind of winded, so we were not able to get back on the defense like we did in the first half. We weren’t able to pass as well simply because they didn’t have their feet. When you’ve got ankle injuries, it’s just hard to move.”

The Hornets built a 60-48 lead with 7:05 left to play on strong performances by Rashida Young and Shamika Hayes, but the Eagles would start to fight back, cutting the score to 61-51 with 6:15 left.

Fueled by a Christina Hayes three pointer and a few shots in the paint from Brittney Carter, the Eagles would go on an 11-0 run and take a 62-61 lead on a basket down low from Carter with 2:09 remaining.

The Hornets would have three chances to take back the lead, but missed shots on three straight possessions.

The Eagles would extend their lead with a pair of trips to the free throw line, as missed shots and turnovers would hurt the Hornets with time running out.

With the score standing at 66-61, Concordia would have one last shot, as Shamika Hayes would hit a three to make the score 66-64, but with only 0.7 seconds remaining the Hornets could not steal the Eagles’ inbound pass in order to attempt a game-tying shot.

Faulkner was led by Carter, who had 19 points, and Hayes, who had 17 points.