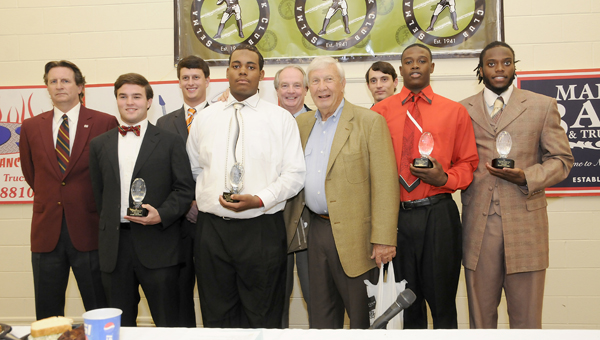 During the final meeting of the Selma Quarterback Club, four local student athletes were honored for their performances on and off the field with scholarships.

The students, board member Gus Colvin said, were evaluated very closely before the final recipients were awarded.

“There are four areas we look for when awarding these scholarships,” he said. “The first is financial need. The second is academics and community involvement. We also look back at the grades.”

The four scholarships given out each year are named for Harmon Carter, Fred Davis, Larry Striplin and W. Forrest Hatfield. Each member, Colvin said, made significant contributions to the Quarterback Club and their communities.

In addition to the scholarship, each of the recipients was also given a trophy.

Narrowing the field, club captain Leonard Ingram said, was not an easy task. The process began with a field of about 10 young men and was narrowed to the final four.

The four young men who received scholarships, Ingram said, are outstanding young people and worthy of the honor.

“They are a very deserving group,” he said. “It was tough to narrow it down. They all had good grade point averages and were great young men.”