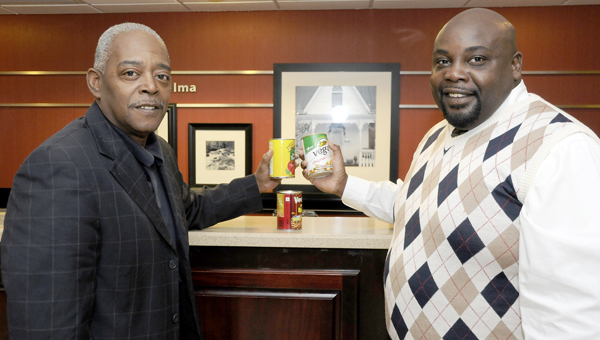 Larry Vasser and Rufus Ford stand with some of the canned goods that have already been collected. The public can drop off canned goods Monday through Friday at the Hampton Inn front desk. -- Desiree Taylor

In the midst of harsh economic times, the Selma Area Food Bank has been hit hard by theft, leaving many families who depended on its services, in dire need. Two local groups are hoping to bring some relief.

The Hampton Inn in partnership with the Renaissance Development Center, a child enrichment program, kicked off a canned good food drive Wednesday to help Selma’s hungry. The public can drop off their canned items at the hotel’s front desk any time until Dec. 31. The goods will be boxed and later distributed to the area food bank.

“We came together and wanted to do something that’s good for the community,” Hampton general manager Rufus Ford said. “We wanted to do whatever we can to raise awareness and give back to the area food bank.”

Ford said the goal of the drive, which was initiated by an employee, is to get as many people involved with the project as possible. For every three canned goods donated, Ford said, a guest will get a room discount.

“We’re going everywhere — schools, businesses … we’ll take whatever we can get,” Ford said. “We’re tired of folks breaking into our food bank. We want to let them (the food bank) know we do care and we’re disappointed that people keep breaking in to the food bank in a time when many families need help. Every item counts.”

“We’re very concerned about people not having enough to eat,” Holmes said. “In the Black Belt, unemployment is really high … times are really hard. We wanted to do something to help children and families.

“It’s such a blessing Mr. Ford has taken on a humanitarian stance,” Holmes said.

“We really want to be a part of this effort as much as we can.”

RDC Board chair Larry Vasser said community service is what the organization is all about.

“Anytime you can do something community-based, it’s what it’s all about,” Vasser said.

“We’re thrilled to be able to do something positive in the community.”