Concordia ends with a win 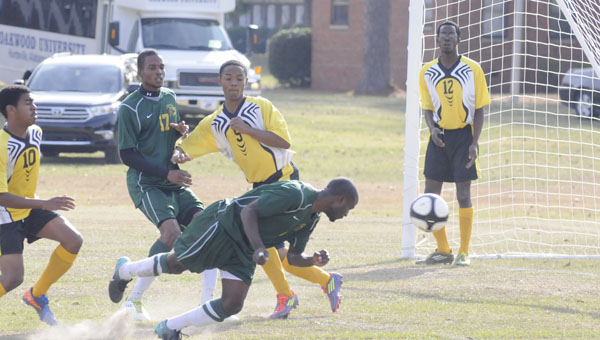 A Concordia College player aims a header toward the goal as Troy Bacchus provides support. The Hornets defeated Oakwood University 4-2 Sunday to finish the season with a victory. -- Robert Hudson

The Concordia College men’s soccer team was able to close the season on a high note and send its seniors out with a win, as the Hornets defeated Oakwood University 4-2 on Sunday.

Head coach Gregory Williams said teamwork was the key to victory Sunday afternoon for his Hornets (6-5-1).

“Teamwork and hard work were the key, as usual,” Williams said. “They were also determined to win this game just for the seniors.”

Williams said it is great to send the seniors out victorious after all the hard work they’ve put into the program.

“They’ve worked hard for us the last four years,” Williams said. “To leave like this is something special, not just for me, but to them.”

The Hornets struck first early in the first half as Lekol Kordah scored on a header off a corner kick to give Concordia 1-0 lead.

Later in the half, Kordah would strike again, as he put in another goal to extend Concordia’s lead to 2-0.

The Hornets would carry over the momentum to the second half as Corey Marzett would score a goal to make the score 3-0 Concordia.

But Oakwood would fight back, scoring two goals to cut the Hornets lead to 3-2 late in the second half. But senior Kareem James would seal the game for the Hornets, as he scored a goal to make it 4-2.

The Hornets’ seniors were glad to go out victorious.

“It feels good,” James said. “I like the fact that I ended on a good note. I really appreciate the support and all the fans and family that helped us through.

Senior Kareem Chrysostom said it was great to finish his college career victorious.

“It was great to have a winning season,” Chrysostom said. “We got great support and we enjoyed every bit of it.”

Senior Hyron Browne-Baptiste said this season had its ups and downs, but it’s great to go out with a win.

“It’s always good to win,” Browne-Baptiste said. “This season was kind of tough, but we had our wins, we had our losses, and we came out victorious today and everybody came out happy.”