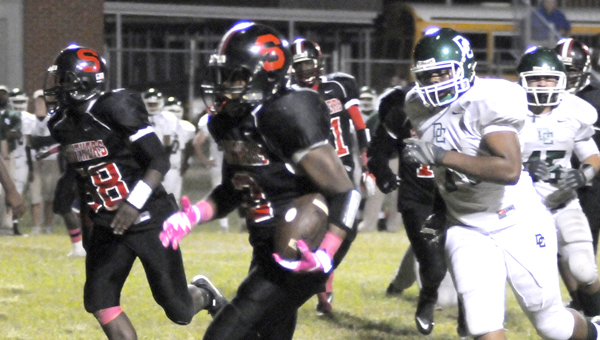 Zollie Glover gets loose for extra yardage in Southside’s win over Dallas County. The Panthers are hoping to build momentum for 2012 with a home win over Choctaw County Friday night. -- File photo

The Southside High School Panthers football team will play its final game of the season at home and is hoping it can end on a high note and send the fans home with a smile.

The Panthers (1-8, 1-6) will play Choctaw County (2-7, 1-6) Friday at 7 p.m. Panthers head coach Bertrum Crum said his team is looking to find something that will help them in the future.

“The main thing I want to focus and concentrate on going into the last game is eliminate mental mistakes and find something positive to build on in the future,” Crum said.

The Panthers have been focusing on the mental and strategic aspect of the game in practice.

Crum said the team has to correct mistakes, such as those in the secondary, which hurt in last week’s 50-26 loss at Holt.

Crum said a win Friday night would mean a lot to his team, which is filled with players who are getting their first game experience of their high school careers this season.

Crum said a win would also help the Panthers continue moving toward their long-term goal.

“We’ve got a lot of guys who are 11th graders in the classroom, but are freshmen on the field,” Crum said. “What a win would do for us Friday would help us to reach our goal of being one of the best teams in the state of Alabama.”

Eagles want to end with a win

The Eagles will have to be disciplined on defense to slow down the Lakeside wishbone attack Friday night. -- File... read more