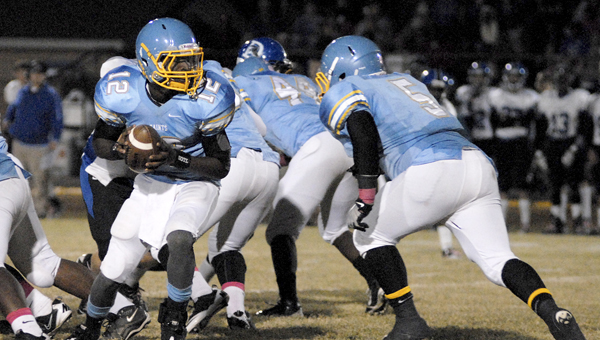 Selma quarterback Jesse Harris fakes a handoff to running back Javarrius Culpepper during the Saints’ final home game of the season Friday against Demopolis. -- Tim Reeves

In the final region contest of the season, the Demopolis Tigers ran over, through and around the Selma Saints en route to a 41-21 win. The victory further solidified the Tigers’ position in the Class 5A playoffs, set to begin Nov. 4, while the loss locked in the reality that the Saints would finish the season with a losing record as they fell to 3-6.

“We had some big plays tonight. We have struggled the past few weeks offensively but thought our guys had a really good week of practice and it was evident in the way we played tonight,” Demopolis head coach Tom Causey said. “I thought offensively we did the things we needed to do and on defense we got the stops when we needed them.”

For Demopolis, the offensive plan revolved around senior running back James Wilson, who finished the game with 241 yards rushing on 22 carries and two touchdowns.

“It’s his first year really playing that position,” Causey said of Wilson. “And, he just keeps getting better as the season wears on.”

As for Selma, a few key penalties and turnovers added up to be too much for the Saints to overcome as they were unable to get into their game plan.

“I thought we had a good game plan offensively tonight,” Selma head coach Leroy Miles said. “But, we just weren’t able to get on the field and implement.

“We went into the game knowing we could run the ball, but when you’re playing from behind, you have to do some things you are not comfortable with.”

On the night, the Tigers racked up 533 yards of total offense, with 386 of that coming on the ground. For the Saints, they had a good night running the ball, picking up 313 on the ground, but it wasn’t enough to match Demopolis score for score.

“It’s a tough loss, but I feel like our kids played hard; they played very hard,” Miles said. “It’ll work out. We are just going to keep working and build for next year.”

Although the tough running attack wasn’t able to keep Selma in the game, it did give them the lead as they took their opening drive 86-yards on 11 plays for an opening touchdown.

The drive was capped off by senior running back Derrick Howard, who raced 40 yards through the Demopolis defense for the touchdown.

Demopolis would answer with an impressive 8-play drive for a tying touchdown that was finished off by a 41-yard pass from quarterback Tyler Oates to Demetrius Kemp with 2:19 to play in the opening quarter.

After that, the Tigers added a field goal by Michael McPherson and a rushing touchdown by Oats to take a 17-13 halftime lead.

“I keep going back to it. But when our guys have a really good week of practice they play well on Friday,” Causey said.

“I thought offensively we did the things we needed to do to put the ball into the end zone.”

Overall, Oates was 5-for-9 passing for 147 yards, two touchdowns and one interception. The touchdowns went to senior wide receiver Jerry Campbell and sophomore wide receiver Demetrius Kemp. Oates also finished the game with 83 yards rushing and one touchdown.

For Selma, Howard finished with 186 yards rushing and two touchdowns, while junior quarterback Jesse Harris had 72 yards rushing. Harris also contributed 84 yards of offense through the air as he now takes control of the team as the season winds down.

Trojans can’t hang on for win

Joel Taylor looks for running room in the Trojans’ 39-19 homecoming loss to Abbeville Christian. The Trojans were unable to... read more