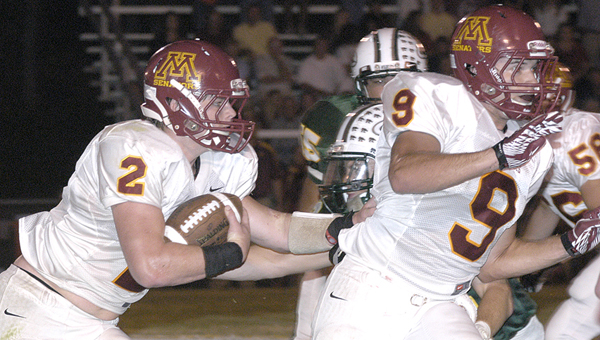 Morgan Academy's Hain Beers forces a fumble during the first quarter of the Senators' 48-6 win over visiting South Choctaw Academy. Beers also scored a TD on a 25-yard run and had six tackles. -- Dennis Palmer

The Morgan Academy Senators celebrated homecoming in style by scoring at will and routing visiting South Choctaw Academy 48-6. The game was over after the first quarter as the Senators scored five TDs, including two touchdown runs from Parker Hughes of 55 and 48-yards. Hughes touched the ball on offense once more, a 63-yard touchdown run in the third quarter. With 162 yards against the Rebels he runs his season rushing total to 1,452 yards on 139 carries, averaging 10.5 yards per carry.

Morgan head coach Brian King was pleased with his team’s performance, as the Senators have reeled off four straight wins.

“After our first game and seeing what we really had, at this point I believe we’re right where we want to be, but there’s still some things we need to work on,” he said. “Our players make the calls on the field and we’re so much better than we were at the beginning of the year, but it’s still a work in progress.”

The Senators (6-3, 4-2) struck first on a Hughes run and again after Trevor Bates intercepted a Rebel pass and returned it to the South Choctaw 20-yard line. Bates then finished the job running around left end for a TD.

Hain Beers, who also had six tackles on the night, got in on the scoring in the next series blasting up the middle for a 20-yard touchdown. Hughes scored again before McCain Levins, who rushed for 50-yards on five carries, bulled in from 2-yards out to cap the first quarter scoring. Levins was also five-of-six on PATs.

Getting out of the gate quickly against the Rebels (0-10, 0-6) allowed King a chance to get some of his younger players some game experience.

“Offensively I thought Austin Ivey did a good job running the quarterback position and Wyatt Sims did a good job,” King said. “And Elliot Oslund, every time he touches the ball he seems to make things happen and he’s only a ninth grader, so there were some surprises at running back.”

Morgan was scheduled to close the season against Southern Academy before prepping for the playoffs, but King said Southern has indicated they will have to forfeit the game due to low numbers and injuries. King said forfeiting means Southern would have to pay a fine and not be eligible for the playoffs, even after they’d earned a spot.

“It’s technically not official because the AISA has not called us,” King said. “We called and talked to their headmaster and he confirmed it, but until we hear from the AISA it’s not official.”

If Southern does forfeit, that means Morgan can begin prepping for Lee-Scott, their first-round playoff opponent, whom King said is going to be a challenge.

“The coaches have already started breaking down film on them and by Sunday we plan to have a full game plan and to work that for the next two weeks,” King said. “They’re a spread team with a big, tall quarterback and Coach Robert Maddox was the head coach at Troy,” King said. “It would be our toughest win of the season.”