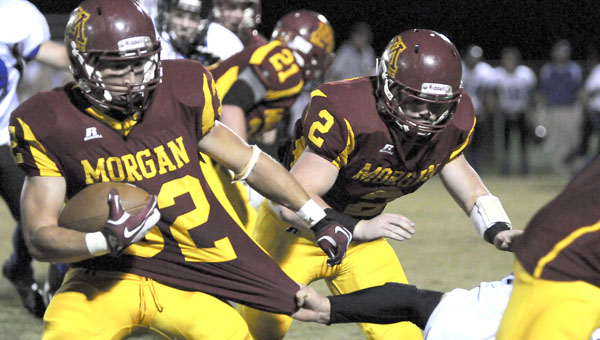 The Morgan Academy Senators, with help from running back MaCain Levins, are hoping to build momentum heading into the state playoffs. The Senators are preparing for South Choctaw Academy in this week’s homecoming game. -- Rick Couch

After locking up the third seed in Region 2 of the Alabama Independent School Association Class 3A state playoffs, the Morgan Academy Senators will look to improve going into the postseason.

“This is our time to fine tune some things, work on some pass defense, and work on our passing game,” King said. “These next two games, even though they’re not region, they still matter because it allows us to try some things that we wouldn’t normally.”

King said the past few games have been a big boost for his team and has helped the Senators better position themselves for the playoffs.

“It was a big rebound in the season because we won three straight including two consecutive home games,” King said.

“It’s a big confidence builder for us. We wanted to be third in the region. We feel like that’s the best spot to be in, and we were able to set a goal and accomplish it. Now, we want to move on and see what else we can do with that momentum.”

King said the players are excited about the rewards their success on the field has brought, but they know they still have to work hard in order to keep winning.

“They’re extremely excited, but they know they’ve got a lot of work to do,” King said.

“This is just a stepping stone. They’ve got to really lock down and fix some things if they want to continue.”