Aggressive play pays off for Wallace 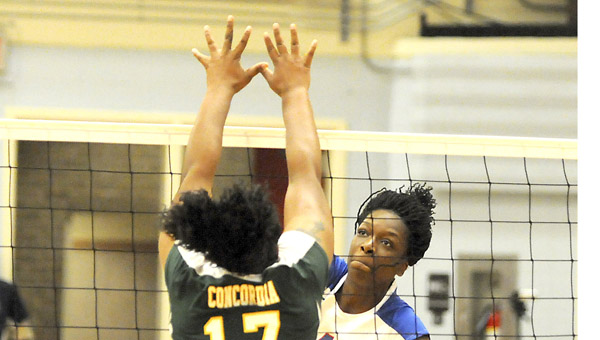 The Wallace Community College-Selma Lady Patriots volleyball team took care of business Thursday night at Wallace and moved one step closer to a program milestone, as they defeated the Concordia College Hornets 3-0 (25-13, 25-13, 25-19).

The Lady Patriots (9-6) made few mistakes as they maintained control throughout the match against the Hornets.

“The key was everybody playing together as a team, having fun and letting fun be the most important thing, and minimizing mistakes,” said April Harper, head coach of Wallace volleyball. “We did good transitioning from the net for hits, covering on the court and just cutting down on the mistakes. I’m very proud of what they’ve done so far.”

The Lady Patriots were led on the night by Brandi Jones, who had nine kills.

April Clark and Nakia King also added six kills a piece for the Lady Patriots. Harper said her team has improved over the course of the season, and is approaching a milestone for the program.

“We’ve improved a great deal,” Harper said. “Right now we’re 9-6, which puts us in a position to be invited to the tournament (the Alabama Community College Conference tournament) for the first time in the history of Wallace volleyball, which is only a 5-year-old program.”

The ACCC tournament will begin in the first week of November, and teams are still playing for seeding.

The Lady Patriots are a young team, with 12 freshmen and only three sophomores, but that hasn’t stopped them from being aggressive on the court. Harper hopes that aggressiveness continues.

“I want them to continue to play aggressive, hustle and play with a lot of heart and love for the sport,” Harper said.

The Lady Patriots will take the court again Thursday, Oct. 13 when they travel to Bay Minette to play Faulkner at 7 p.m.

By Robert Hudson The Selma Times-Journal With the postseason fast approaching, the Morgan Academy Senators will travel to Hope Hull,... read more