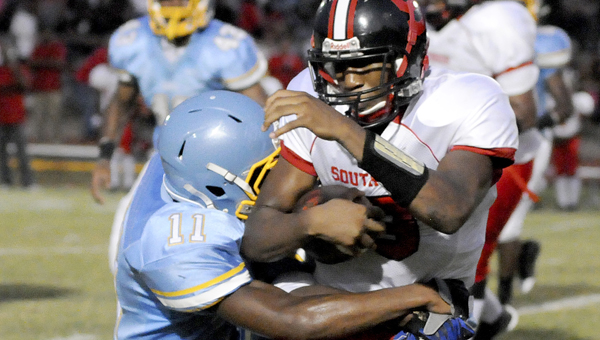 Coming off a dominating 56-6 win at home over Wilcox-Central to capture their first region win of the season, The Selma High School Saints football team will hit the road Friday night for another all-important region showdown.

The Saints (2-1, 1-1) will travel to Tuscaloosa to play the Central-Tuscaloosa Falcons Friday at 7 p.m.

Selma head football coach Leroy Miles said even though the Falcons (0-3, 0-2) seem to be down this season they’re always a tough opponent.

Miles said, despite the Falcons record, it’s going to be a tough test on the road for the Saints in another important region game that will help decide they’re postseason fate.

“It’s always tough when you’ve got to play on the road in an area game against a team trying to get in the win column,” Miles said.

“I think this game is very big and very important to where we’re going to finish in this region. We need this win. I think it’ll be a momentum swinger for us.”

Miles said special teams would be key again this week.

After special teams mistakes hurt the Saints in their 34-33 loss to Patul Bryant, they were much improved against Wilcox-Central, as J’Vantae Furlow made all eight of his extra points and Roderick Brewer returned a punt 95 yards for a touchdown.

New Concordia head coach Gregory Williams said he believes his team has enough talent to make some noise in the... read more