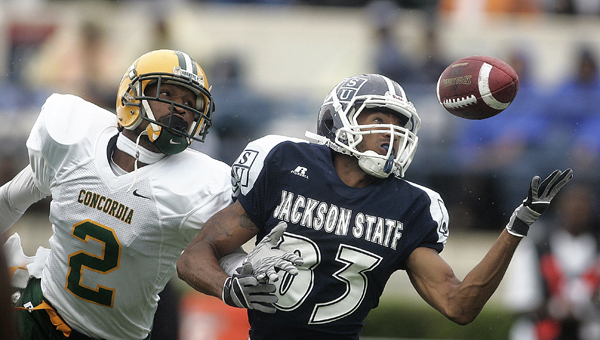 Concordia defensive back Anthony Webb battles Jackson State receiver Rico Richardson for the ball during Saturday’s game in Jackson,Miss. The Tigers from JSU beat the Hornets 42-2 at Mississippi Veterans Memorial Stadium in the season opener for both teams. -- Charles A. Smith

JACKSON, Miss. — A preseason filled with so much hype and so many expectations for Jackson State’s pass-happy offense started off oh-so sweet  – a 60-yard touchdown pass from quarterback Casey Therriault to Rico Richardson on the first play of a season-opening 42-2 win over Concordia College on Saturday.

The rest of the afternoon – at least for that once high-powered, high-flying offense – was submerged by Tropical Storm Lee’s whipping winds and driving rains, and stalled by familiar issues to this team: inefficient pass blocking and a lackluster run game.

Casey Therriault, one of the most prolific passers in the nation last year who’s expected to set a bevy of school records in 2011, went 15 of 32 for 218 yards, his third fewest in one dozen games at Jackson State.

The unit failed to establish a running game or consistently block for Therriault – all of this coming against Concordia, a school of 600 students based in Selma, Ala., that is not a member of the NCAA or NAIA.

“We’ve got a lot of things to work on,” Richardson said.

It’s a good thing for that defense.

While the offense likely disappointed many of the rain-soaked, wind-burnt announced 4,911 at Veterans Memorial Stadium, the defense had them stomping the bleachers.

The Tigers got their first shutout in nearly three years, allowed just 235 yards, and kept the Hornets from scoring despite their six drives inside of the JSU 32-yard line.

“That’s always the mentality. We bend and we don’t break,” defensive end Donovan Robinson said. “We wanted the shutout, and we got it.”

Cornerback Qua Cox had two of four JSU interceptions and one of two blocked kicks.

Cox blocked a 31-yard field goal, and Robinson blocked a punt in the second quarter that set up the offense a yard shy of the end zone.

Cornerback Andre Wright began the fourth quarter by returning a fumble 64 yards for a score to make it 35-2.

Wright’s touchdown followed a scoreless third quarter, one in which the Tigers’ offense picked up one first down and failed on two fourth-down attempts.

Jackson State’s starting offense was shutout in the second half and tallied less than 100 yards over the final two quarters.

“I think we might have became a little laxed after that.”

Trojans still looking for a win

Sumter Academy head coach Robert Gartman didn’t have too much to complain about Friday evening as his Eagles torched the... read more