Ellwood hopes for a win at home 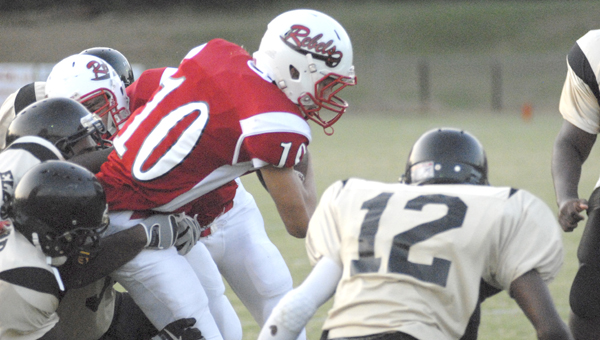 After two straight weeks on the road, Ellwood Christian is hoping a swarming defense and potent offense will help them break into the win column Friday night at Memorial Stadium. -- Rick Couch

After opening the season with two road losses the Ellwood Christian Academy Eagles football team (0-2, 0-1) is hoping Friday night’s home opener will give them a boost.

The Eagles will play their first home game of the season Friday night at Memorial Stadium at 7 p.m. when they face the South Montgomery County Academy Raiders in region play.

“I really think playing at home is going to help us,” Stokes said. “We’re just telling them (the players) to go out, play hard and defend their turf. Just do the little things we have to and try to win a ball game.”

Stokes said the Raiders are a good team that utilizes the spread offense.

“They’re good offensively and defensively,” Stokes said. “So, we’ve got our hands full again this week.”

Stokes said the Eagles have to improve their play in the trenches and the secondary in order to win this week.

“We need to be 1-1 in the region instead of 0-2,” Stokes said. “I think that’ll give our kids a little confidence. It would be tremendous for the team to win a region game.”

Stokes said his team would also need to be disciplined in order to win.

Hornets hope to bounce back