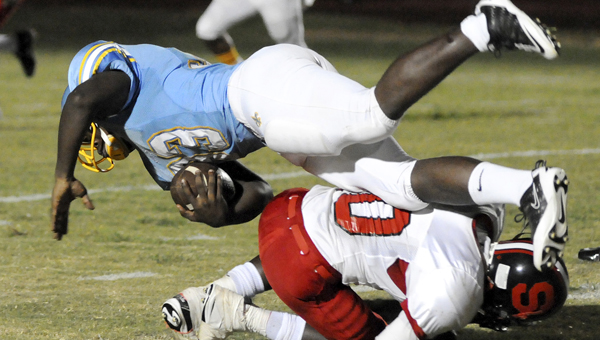 Jamund Martin takes to the air in Selma’s 46-8 win over Southside at Memorial Stadium. -- Tim Reeves

High school coaches come to expect a few mental errors and mistakes in the season’s first game, but the coaches from Southside and Selma had more mistakes, errors, goof ups and snafus than they could have ever asked for.

The stat sheets for both teams were riddled with fumbles, turnovers, penalties and missed opportunities.

But, in the end, it was Selma who made fewer mistakes, took advantage of those mistakes made by the Southside Panthers, and cruised to a 46-8 win over their cross-county rivals.

“It appeared that our players got caught up in the hype tonight,” first year Southside head coach Bertrum Crum said. “We going to take this loss and learn from it.”

For Selma head coach Leroy Miles, winning the game was nice, but he knows his team made far too many mistakes to beat some of the teams on the Saints’ schedule.

“We’ve got a lot still to work on,” Miles said, referring to the personal foul penalties, pre-snap penalties, turnovers and formation problems. “We made a lot of mental mistakes, and we cannot have those types of mistakes against good teams.”

While Miles may have been disappointed in the mental errors, he came away Friday night with a better appreciation of the type of running attack he has at his disposal this season.

On the night, the Saints’ running game racked up 353 yards of total offense, including four touchdowns.

“We’ve got some good backs,” Miles said. “We’ve go three or four that can come in and run and give us some good carries.”

Leading the way on the ground were Selma’s two quarterbacks Darion Alexander and Jesse Harris.

Alexander, the starter, had 117 yards on just four carries, while Harris, who played a large portion of the game late in the first half and in the second half, racked up 97 yards on the ground on four carries, including a 12-yard touchdown run.

Derrick Howard, Jamund Martin and Brandon Smith each added a touchdown of their own on the ground for the Saints.

The Saints also recorded touchdowns through special teams and on defense.

With 8:20 remaining in the first quarter, Southside quarterback Rajadavia Phillips was picked off by Roderick Brewer, who returned the ball 55 yards for a touchdown.

On the ensuing kickoff, Brewer did little to endear himself to his coaches, as he was ejected from the game for reportedly throwing a punch.

Later in the first half, with the game already out of reach with Selma leading 26-0, Selma’s Alexander Burton picked up a fumble at the Southside 30-yard line and returned it 70 yards for a touchdown with 4:50 remaining in the first half.

“It felt really good. Really good,” Burton, a senior playing in his final rivalry game, said. “There was a lot of talking going back and forth the first quarter or so until we started putting up points. Then it got real quiet on the other side.”

For Southside, Crum was pleased with the way his players continued to fight and play, even when the game was well out of reach.

“The main thing I am proud of is my players’ attitudes,” Crum said. “They stuck it out. They didn’t quite, they didn’t give up on me, they didn’t throw in the towel. They kept playing football.”

“It’s a big difference between practice and actually suiting it up for real, like tonight,” Crum said. “They guys learned that tonight. Hopefully we will take that lesson and put it to use getting ready for Greene County.”

Southside was able to get on the board late in the game when quarterback Jhalandis Sullivan found Jamarcus Brown across the middle.

Brown, broke a number of tackles on the way for 77-yard touchdown with 22 seconds remaining in the game.

Selma will travel to Tuscaloosa to take on Paul Bryant next week, while Southside will host their home opener when they welcome Greene County.