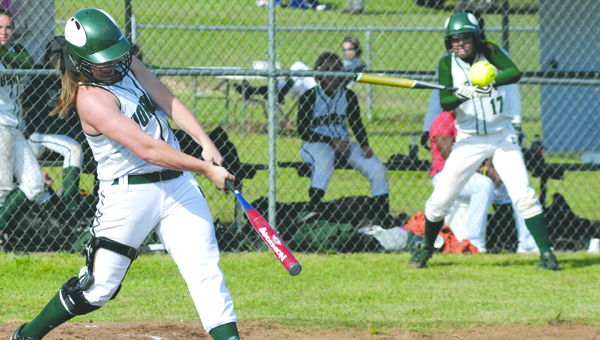 Dallas County High School’s Cassie Daniels was a key piece of the Lady Hornets 2011 state championship squad. Daniels dominated the competition on the mound and was also a productive hitter. For her performance, she was recently named to the Small Schools All-American team by MaxPreps. -- Chris Wasson

A Dallas County High School softball player was recently named one of the nation’s best.

“She really helped us a lot. To have a small, country team get somebody on an All-American team really means something.”

The senior pitcher was named the Alabama 4A State Player of the Year this past season after going 34-5 with 426 strikeouts in 223 innings pitched, including 20 shutouts and six no-hitters.

Daniels said she was surprised when she heard the news.

“I was not expecting it at all,” Daniels said. “I never saw it coming. I have been blessed by God.”

Daniels said she owes a lot of her success to the play and support of her teammates.

“All the numbers and statistics are what they are because I had a great defense behind me,” she said. “Some people don’t realize that a no-hitter does not mean no one hit the ball. It means that you either struck out the hitters or someone hit the ball and your defense made the catch or the play and prevented it from being a statistical hit.

“I owe those numbers to the great defense our team played.”

Daniels said she also had great coaching and a great catcher, while Miller says her leadership is what also helped her win the award.

“She’s the player I go to. When she hurt her knee, she was working harder than anybody, and when the team saw her setting the example, they knew they had to work extra hard.”

Coaching youth baseball and softball can be a tremendous strain on vacation plans and work schedules. However, all of the... read more