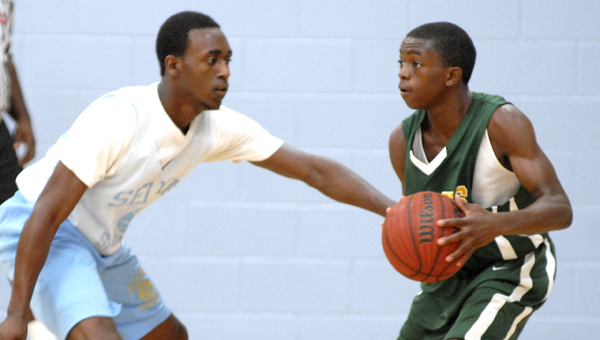 While other students are watching television or hanging out with friends, basketball squads in the Black Belt are preparing for the 2011-12 season. Summer camps give teams a chance to stay in shape and work on their weaknesses. -- Chris Wasson

Even in June, Selma High School and Central-Hayneville are involved in classic basketball games.

During the Selma High Basketball Camp, five teams showed up in an effort to become better teams and prepare for the upcoming season.

“It’s very important to be able to get out here and face this good competition,” Selma head basketball coach Woodie Jackson said. “For a team like ours, that lost four starters, it gives these B-team players that are coming up a chance to learn what playing at the varsity level is about, because it is definitely different.”

Selma, Central-Hayneville, Keith, Greene County and Southside all showed up to Chat Academy in Selma from 10 a.m. until 6 p.m. to get a little bit better during the summer months.

“You don’t have to go very far to have some of the best competition in the state,” Jackson said. “You can’t duplicate that kind of hard work and pressure in practice. You can holler and scream all you want, but as soon as they get in front of this kind of competition, it turns up for them.”

Selma’s Devonte’ Rembert, who should be one of the four new starters for the Saints varsity side, said the summer workouts give him and his teammates work against a tempo they weren’t used to at the junior varsity level.

“It’s a different league and level,” Rembert said. “It’s such an up-tempo style of play. You have to learn to adapt and to keep up with them. Everyone plays hard, so you have to get used to that style, and during the season it comes off as second nature.”

Jackson said one of the main advantages in getting his players games in the summer was teaching his own style of play before the real games begin.
“We are so much about fundamentals,” Jackson said. “That’s the first thing we teach. You have to be able to protect the ball, to box out, be aggressive on the offensive side. On defense, they have to learn to gut it out. At the B-team level they can have success without gutting it out on defense, but not here.

“We’re just glad to get out here and work.”

By Robert Hudson The Selma Times-Journal A Dallas County area basketball coach will be heading to Montgomery to coach some... read more