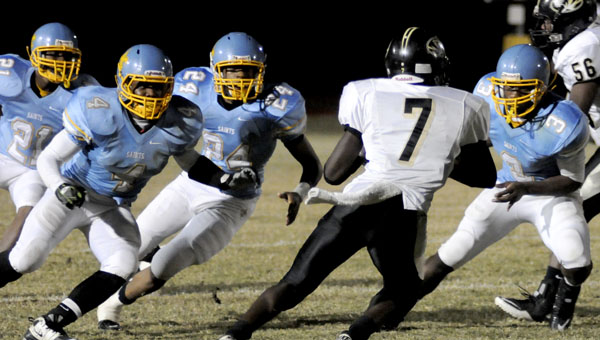 A group of Selma High School defennsive players surround a Greenville runner during last season’s victory. The Saints will have a challenging schedule ahead in 2011 with a strong region and nonregion 6A teams like Stanhope-Elmore and Sidney Lanier. -- File photo

With just three months before the opening kick-off, local football teams are practicing in the spring.

The schedules for AHSAA teams are made a couple of years in advance, but each year, the difficulties seem to change.

Last year, Selma High School pushed its way to a playoff berth with a 6-5 record before finally falling to Pleasant Grove High School.

Next year, the team will continue with its region play that includes the always-powerful Demopolis and Greenville and 6A challenges Stanhope and Sidney Lanier.

With a combined record of 42-56, which comes out to a .428 winning percentage by teams that it plays, Selma’s schedule may look easy.

However, don’t let that fool you.

The Saints must go on the road to region foes Paul Bryant, Chilton County, Central-Tuscaloosa and Greenville, who will be looking to avenge last year’s loss at Memorial Stadium, more than half the season.

“When you go to these places with such great tradition its hard to win over there,” Saint’s coach Leroy Miles said. “You want to be able to play at home all the time, but that doesn’t always happen. It’s going to be really different from last year.”

They will also travel to Stanhope Elmore, who finished their season in the 6A semifinals.

The newly renovated Memorial Stadium will see the Saints host archrival Southside   and region competition home games against Wilcox-Central, Brookwood and defending region champions Demopolis, who the Saints pushed to the limit but fell short by six points.

“You always tend to play better at home,” Miles said. “However, Demopolis has such great tradition that it is a tough game even if we are playing at home. (Demopolis) Coach (Tom) Causey is a great coach and it will always be difficult.”

One thing that will make the schedule even more difficult is the coaching changes at three of the schools: Paul Bryant, Greenville and Wilcox-Central.

“New coaching can come in and change a program,” Miles said. “Just like we were able to come in last year and make it to the playoffs, another team can get better as well. That will be the hardest thing about next year.”

– This is the first in a series of stories highlighting the schedules of local high school football programs.