First track meet is a feeler for teams 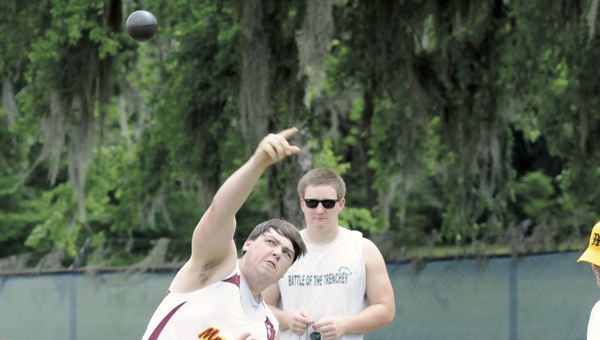 Selma’s Memorial Stadium was alive with activity Monday as more than 20 schools came together for the first Alabama Independent School Association track meet of the season.

Participating schools came from as far away as Lanett, Atmore, Livingston and Birmingham.

Overall, Morgan Academy coach Rob Robinson said he was pleased with the turnout for the meet.

“We were expecting a lot of schools,” he said. “We had about 21 last year and probably somewhere around that this year. We were glad to have a crowd.”

The meet, Robinson said, was an opportunity for the different squads to get a better idea of where they stand heading into the season.

“This was really more of a practice to help them get some numbers,” he said. “It gave us a chance to put some different people in different events and see what they can do.”

The meet was especially important because of cancellations at other schools. Tuscaloosa Academy did not schedule their annual meet and another scheduled for Escambia Academy was cancelled because of inclement weather.

According to AISA rules, teams must participate in two meets to qualify for state.

Though the statistics had not been compiled at press-time, Robinson said he was pleased with what he saw in the first meet.

“I think we did very well,” he said. “We have a lot of baseball players out there, so we very rarely get to be a team. It was good to get everyone together.”

Numerous events were held including the discuss, shot-put, hurdles and distance races. Because of time constraints, the 4-by-400 meter was cancelled, Robinson said.

The Senators and other area squads will now focus their attention on improving on Monday’s performance and preparing for the April 11 meet.

The meet will again take place at Memorial Stadium and give the teams one more tune-up.

before the AISA state championships.