Auburn singers are here in February 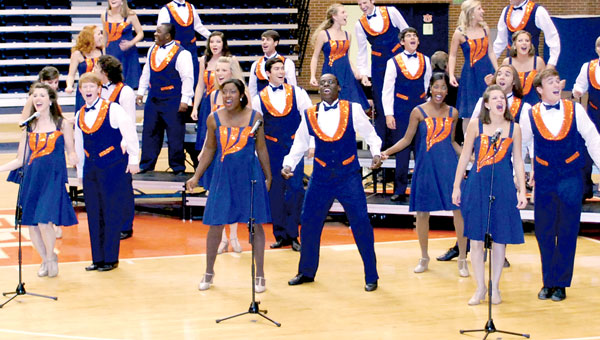 Move over Glee, there’s a new act in town.

Two of the singers Jeremy, 20, and Jordan Lee Spencer, 22, of Auburn stopped in Selma Wednesday to promote the upcoming event.

Fuller Hardware and Supply’s Sis Yarbrough said the singers are phenomenal and she wants the public to know about the unique act.

“A lot of people just don’t know something like the Auburn Singers exists,” Yarbrough said. “They’re a great and talented group and when you watch them, you just see their personality come out.”

In its 39th year, the 36-member show choir has traveled to New York, Chicago, Europe and Washington, D.C.

Jordan, who is also the 2010-2011 Auburn University homecoming queen, said the choir brings something new and different.

“We’ve done shows where we’ve performed songs from different eras,” Jordan said. “We sang ‘Jump’ by Van Halen and ‘Dig a little Deeper’ from Disney’s Princess and the Frog. In December, we did a Beach Boys medley.”

For the Spencers, music runs in the family.

“Our older brother and sister-in-law were a part of the AU singers,” Jordan said. “My grandmother took me to their shows in middle school. We were in the church choir when we were younger, and I did show choir in high school.”

Both Jordan and Jeremy agree the group is a fun form of expression. They hope their sound brings joy to listeners.

“We want people for an hour and a half to forget their troubles and just have fun,” Jeremy said.

There’s a song by Peter, Paul and Mary that starts, “If I had a hammer, I’d hammer in the morning,... read more