A revisionist history of Troy 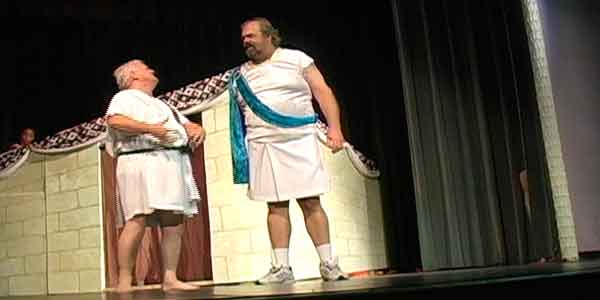 Zeus and Apollo share a moment on the stage in dress rehearsals Wednesday night.--Leesha Faulkner photo

SELMA — Forget everything you knew about the Trojan War, buy a ticket and come to the Larry D. Striplin Performing Arts Center on Friday or Saturday to see the hysterical version of this particular time in Greek history.

In Greek mythology the Trojan War was waged against the city of Troy by the Greeks after Paris of Troy took Helen from her husband Menelaus, the king of Sparta.

It’s one of the most important events in Greek mythology told by Homer in the “Illiad” and the “Odyssey.”

Oh, don’t worry, you’ll hear Homer’s versions — sort of — sung by a blind songwriter to the tune of “The Brady Bunch.”

This version is “the Hysterical History of the Trojan War” by D.M. Bocaz-Larson.

Only, instead of a love story about the face that launched a thousand ships, this revisionist history proffers another version: The gods want to play war.

So, Apollo and Zeus pick Troy and Athena and Hera pick Sparta. Oh, and Poseidon is asked to join the fray, but he just tries to sort it all out.

Maggie Davies directs the play for ArtsRevive. She is also wardrobe mistress and chief promoter of the event.

“Imagine Jerry Lee Lewis meets the Greek gods,” she said. “That’s exactly what we’re doing. It’s full of laughs. A lot of slapstick. We’ve had a great time doing it.”

Local folks fill the parts, including Ed Green as thundering Zeus. “I’m king of the gods, baby,” he yells from the stage.

Green said he has had a good time preparing for the play’s opening night.

“It’s going to be a fun and family-friendly performance that’s absolutely ridiculous,” he said.

Tickets are on sale now and available from ArtsRevive board members, actors and Truax and Co.

Performances are 7:30 p.m. Friday and Saturday.

Two in the Ward 1 election